Eight years is a long time in any walk of life. The construction of the Bridge of the 1812 Constitution in Spain is no different and as a result, efficient, effective and reliable crane equipment was essential. A duo of Linden Comansa 21LC400 tower cranes were present throughout the project, which opened to the public in September of last year.

The bridge, also known as "Bridge of la Pepa" is both an important social and economic presence for Cadiz, which until recently, only two narrow and outdated routes out of the city and for crossing to the other side of the bay. The bridge is one of the major infrastructures built in Spain in recent years.

The cable-stayed bridge has a total length of 3,092m, and its two main pylons reach 185m high, leaving a main span of 540m between them. These hold the deck to a height of 69 metres above sea level.

Owned by construction firm Dragados, the two Linden Comansa 21LC400 tower cranes operated from the two major pylons. One of these was located on the edge of the bay at Puerto Real, and the other in the middle of the sea.

Seville-based Eleva Grúas Torre was in charge of the assembly and dismantling of the cranes, as well as of all the maintenance works.

"The two cranes reached a maximum height of 195.6m. Strong wind gusts are very common in the Bay of Cadiz, with much greater strength at such height, which hampered a lot of the tasks carried out by our team", says Tomás Criado, manager of Eleva Grúas Torre.

The manufacturer explains: Erecting the two cranes was quite a challenge, especially the one situated in the middle of the bay. A mobile crane on a pontoon barge helped to assemble the crane with the minimum height needed to install a hydraulic climbing cage: 14.2m under hook.

With this configuration, the Eleva Grúas Torre team could start with the climbing works and add the remaining ten sections to reach a freestanding height 69.2 m. From this height, the crane worked on the construction of the pylon. With the pylon gaining in height, the crane also climbed until it reached a final height of 195.6m.

In addition to the land-based crane, this 21LC400 required four ties to the pylon to ensure it could work without issue at such a height.

The operation of the 21LC400 cranes, both with maximum load capacity of 18t, consisted in the lifting of all the pylons' steel structures and concrete. And afterwards, the lifting of the cables that support the deck of the bridge.

The 110kW hoisting engines employed allowed the cranes to work at a productive speed and efficiency during the eight year job.

During the works, a change in the design of the metal anchors that attach the cables to the pylons forced Linden Comansa's engineering team to quickly find a solution to an important unexpected situation.

The anchors, which initially had to weigh less than 18t to be elevated and fit into place by the cranes, became pieces of more than 23t.

In this instance, so that crane could load these anchors, Linden Comansa's research and development department reviewed and reinforced the crane's kinematics and counterweights to enable the 21LC400 to lift this extra load in a timely manner.

Following the conclusion of the Linden Comansa tower cranes' tasks in the summer of last year, the Eleva Grúas Torre team turned their attentions to their removal. While both cranes were erected in the same configuration, different issues materialised in their takedowns. The crane in the middle of the bay was the first to be removed, once the most important works on the bridge were completed. The crane had four ties to the pylon, with the highest one 23m long and weighing 10t.

Removing it with a mobile crane was impossible due the height and the presence of the bridge cables, so the tower crane itself had to take care of this manoeuvre.

The 21LC400 had already been jacked down some tower section and when it was time to slew, an "interference arose" between the boom of the crane and pylon. Therefore, it was necessary to remove several jib sections. An articulating crane, located at the top of the pylon for future bridge maintenance tasks, was used for this.

This crane removed jib sections and counterweights in a sequential way, and placed them at the top of the pylon so that the tower crane could lower them down to the deck of the bridge. This made it possible to reduce the jib of the 21LC400 from 50m to 20m. With this reach the tower crane was able to rotate freely and remove the bracing itself.

The 21LC400 installed inland was erected nearer to the pylon compared to the one in the middle of the water. When it came to remove the jib sections of the tower crane, the articulating crane located at the top of the pylon was not able to reach the jib-end of the 21LC400.

As a result, it was necessary to use a jib section dismantling device to reduce the jib length of the 21LC400 from 50m to 30m.

This new configuration ensured that the articulating crane was able to dismantle the last jib section and leave the 21LC400 with a reach of 20m. To achieve this reduction, it was also necessary to develop a new disassembly sequence, moving the trolley winch 20m through the boom, and changing the jib end.

According to Rodrigo García, head of Eleva Gruas Torre's erection team, the removal of both cranes was "complicated", but done efficiently. "We jacked down and dismantled the crane installed in the middle of the bay in just 21 working days, when we had raised possibilities of more than 30 days. In the case of the 21LC400 located inland, it took just 17 days, even though we had several days in which the weather hindered our work," he says. 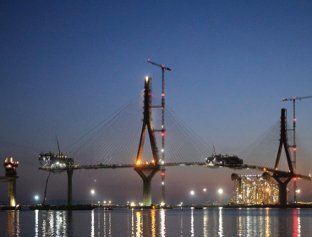 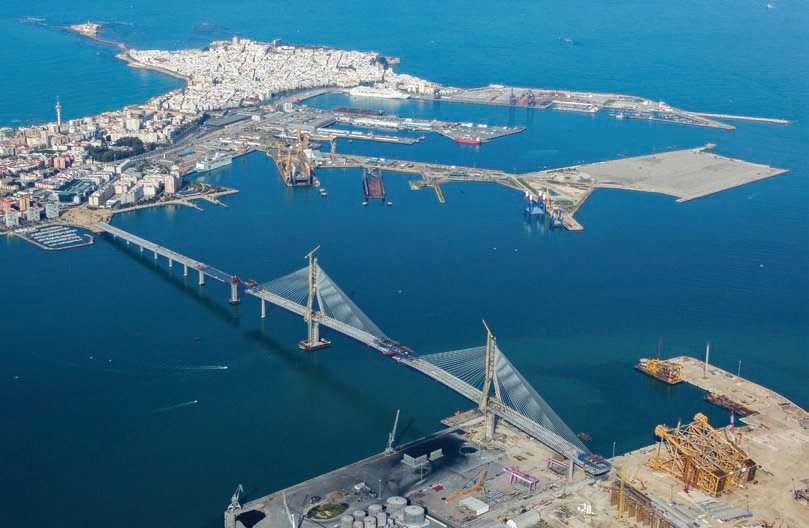 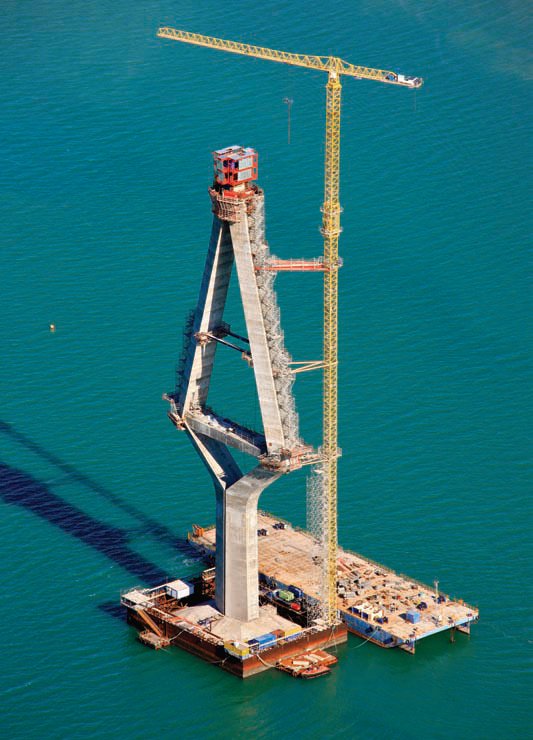