Cappello talked about Terex’s T-Link telematics system, which is based on cloud architecture. He said telematics systems optimise the management of machines, saving time and money. The system offers the ablity to users to look into very specific data and identify any matters they need to address.

The machines are visualised on the map, with users able to analyse more than 20 parameters. “Different user profiles can be set, tailored by different functions. There is a function for support maintenance engineering to plan periodical inspections of the crane.” Cappello highlighted the absence of direct connection with the crane preventing hacker attacks.

“T-Link opens the doors to further features that large amount of data can offer in combination with other technologies such augmented reality, autonomous drones and others. This technology will enable even more benefits like jobsite integration, remote calibration and setting and predictive maintenance.”

Select Plant Hire has around 180 tower cranes in its fleet with capacities up to 66t, and is already using T-Link.

“Most people when they hear the word telematics they think of a tool that tells them when machine is low on fuel, idling for too long or being driven too fast. But we have data that give real insight as to where opportunities lie for the user,” said Bradby.

He said that the tool is useful for lift planning, offering data on wind and weather forecast for the week, by the hour for a specific location. When it comes to live data, the status of one or multiple cranes can be viewed.

Through the replay function the user can choose a specific period and see how each mechanism being used, speed selected by the operator, wind speed, weight reading, the moment, the hook height and the radius. The system also provides a number of pre-designed reports, for example the total amount of weight being lifted on each day.

“We have the ability to produce our own reports on the platform, so we can plot different things against each other. For example, how many times the crane was used in its maximum speed, by plotting winch speed, luffing speed and slewing speed. I can export this data into Excel and manipulate it to see how much time is spent on each gear.”

Bradby talked about the transparency data provide and said that if customers complain that the crane is too slow, data can be used to contest this argument or improve.

He used an example of a crane that spent only 150sec in slewing during the week in maximum speed, 325sec in hoisting and 986sec luffing. “Doubling the speed would gain us 8 minutes. Could it make a difference? Not really.”

He then looked at the crane utilisation data, which showed that the crane sat for hours between lifts. “What crane is it? It is a 32t Terex CTL 630B-32 luffer, a big crane on a major construction project. Admittedly it is slowed down due to Covid-19 but even if we would cram all those lifts in half a day, there would still be considerable amount of time between each lift while the next load is ready.”

In this way he could prove that in this case speed does not make a difference.

“One thing you can take from the data is that if you were to improve the speed of a crane in this case, it would be through the luffing mechanism because it is the one sat at the maximum speed the most amount of time. This is where telematics can influence crane design for the right reasons because it is based on truth. It may hint that the site’s layout is not as good as it should because if the crane has to luff a lot and you lose time to that mechanism. We can get some really good data that can educate our sites and make a difference in how we plan and work.” 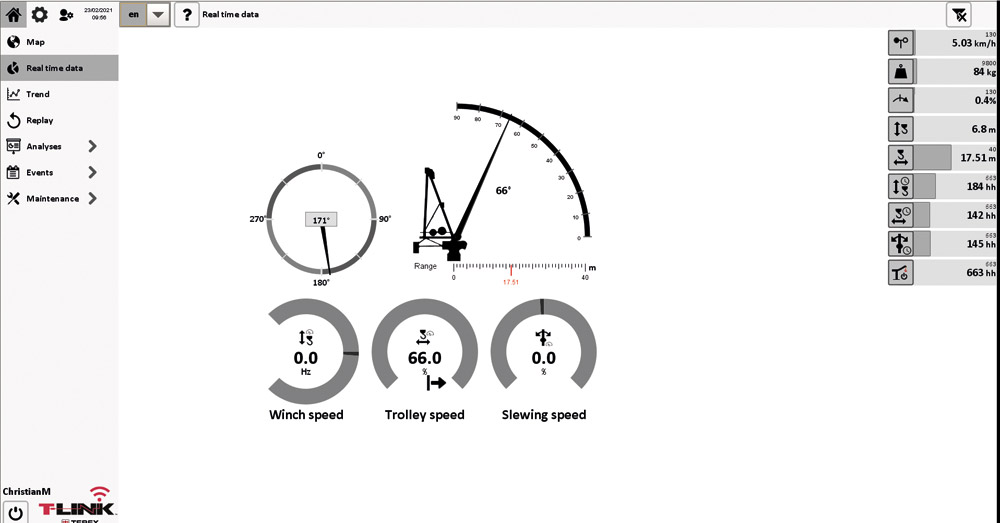