Tower cranes are the standard on ob sites worldwide. Juian Champkin looks at the current crop.

Most tower cranes are made in China. Read Stuart Anderson’s history of the tower crane in our recent February 2022 issue of Cranes Today magazine if you don’t believe me. So if we are doing a global survey of the most ubiquitous of lifting machines, China is where we should probably start.

So we begin with Potain’s new 805 topless tower crane. It is made in their Zhangjiagang factory in China and is targeted to the Asia-Pacific and emerging markets; and they say this is their largest-ever crane for that region.

It is a high-capacity machine similar to their MDT 809 which was launched for the European and US markets in 2020. It comes in 32 tonne and 40 t capacity configurations, with an 80 m jib and a height under hook of 84 m. The high working height comes from a reinforced K-mast system with newly developed installation bases; Potain say that the 8 m cross-shaped base gives performance characteristics more commonly associated with a 10 m chassis.

The counter-jib is no longer than 27.3 m, allowing 7.5 t capacity at 80 m reach. The maximum 32 t load capacity of the M32 version is available to distances of well over 22 m, while on the M40 version the 40 t maximum load can be handled out beyond 18.5 m. The tip loads are well suited to lifting heavier loads within the confined job sites so common in the region.

The rotating section of the MCT 805 can be moved in either 10 or 11 loads; other 40 t capacity cranes can typically require up to 14 containers for transport. The jib is designed so that all its sections can fit inside a standard container: it measures just 1.55 m wide and under 2.5 m high.

Transport and erection requirements are claimed as best-in-class for a crane of 800 mt and on par with 450 mt cranes. The crane can be assembled with its full 80 m jib to 50 m working height in less than three days – twice as fast, say Potain, as conventional 40 t cranes.

“The advantages of fast assembly and compact design are really driving the growth in demand for topless cranes,” says Thibaut Le Besnerais, vice president, brand and product management for tower cranes at Potain Manitowoc, “but the growing popularity of modular construction methods is also creating greater need for higher-capacity models. So the early success of the MDT 809 made it apparent that other regions served by our Zhangjiagang factory would also enjoy the benefits of its innovations, which made the decision to launch the MCT 805 relatively easy. But it has other innovations as well: for instance, there are features that simplify servicing, such as the jib design that aids access to key crane components.”

Potain is a European brand that manufactures in China; Yongmao is a home-grown Chinese manufacturer that exports to Europe and the Middle East – see the box on page 2 for a prime example. Even within the European market Potain finds market variations. Kim Dandridge, is managing director of Manitowoc UK.

“Currently we are working on putting our Common Control System into our range of luffing tower cranes,” he says. “The system gives intuitive control to the operator, and it really does speed up delivery of the crane to the site and shortens the set-up time. Set-up becomes really rapid, a matter of 15 minutes for the operator to establish load charts and the like, which can be a saving of several hours. I think it is a big advance that will be very helpful for the owners and in the end it will help them with their whole life-customer footprint. The first luffers will be fitted with it this year, then through next year we shall see the larger luffers being changed to the CCS system.

“It is the UK, and countries with historic links with the UK, that sees the largest demand for luffing jib cranes: the UK takes at least are at 50% of the market. Part of the reason is legislation: under UK law oversailing rights are limited, and luffing-jib tower cranes don’t need to oversail neighbouring properties. And because they take up less space you can fit more of them, which means more hooks, on a job site. You can put several of them right up against the site boundaries and their counterjibs won’t oversail and they won’t interfere with each other over the site.”

Wolffkran is another company that specialises in luffing-boom tower cranes. In their case, unusually, raising and lowering the boom is hydraulically powered. “The hydraulic cylinder supports the jib better,” says Stephen Palmer, their UK external operations lead, “and it gives the added benefit that it can raise the jib to near-vertical, so we can have shorter park-up radiuses: on our 166 B hydraulic luffing jib crane the minimum radius for parking up is eight metres; if you are on a tight site that can be a real benefit, and it is something that customers always ask for.

“We are selling one of them to one of our long-standing clients, Churchill, who build retirement homes. They are medium-rise buildings, all to a broadly similar plan, and usually in residential areas where oversailing can be an issue, which is part of their logic for choosing luffers, and the 166B is all they need: it has all the capacity and reach that they require, they don’t need anything bigger and they couldn’t manage with anything smaller. They zone them round the perimeter of their site, they have a maintenance package with us that includes erection so we will send our own 250 t or 300 t Grove all-terrain crane to put it up and take it down for them, and the arrangement works well for them and for us.

“One of my biggest ambitions at the moment is to promote our free-standing height. We have developed the TV60 section, and when you use that with the likes of the Wolffkran 355B, which is another luffing-jib crane heavily used in the UK, we can achieve a free-standing height of 150 metres. That reduces tying-in. Clients in the UK are pushing towards modular building, and if you don’t have to tie in then with modular building you can potentially do a floor a week and as the building grows it allows you to bring in the follow-on trades in sooner because each floor is watertight as soon as it is in place. So all of a sudden your construction programme is greatly reduced and you are making a saving.

“Our clients and others in the building industry are seeing the benefits in that already. We are involved with Mace in a couple of projects which part traditional RC frame and part modular, and also with Bouygues, who have luffing jib cranes which again will be for modular use; so I think that is the future really.”

An example of just what he was talking about could be seen late last year in New Victoria in Manchester, where a Wolff 166B and – a first for the UK – a Wolff 235B, both luffers and both owned by Mayo Engineering, began working together on two skyline-altering tower blocks, one 20 storeys high, the other 25 storeys, which will provide 520 new homes on top of ground-floor retail and leisure outlets and other public areas. It was a requirement that the 235 B be free-standing, so as not to slow down construction. It stands 98m tall, with a 45 m jib, and has no tie-ins. The 166 B, also with a 45m jib, stands just a little lower at 83.2 m.

To make this happen, eight 3 x 3m TV 33 tower elements on foundation anchors were used at the base of the 235B crane. It was erected to its final tower height using a 500-tonne mobile crane with a 63 m luffing jib attached to its main boom.

Tower cranes come in basically three variants: the hammerhead, the luffer and the flat-top. There is also the hammerhead-flat-top hybrid the low-top. Jaso have long been known for their low-tops; last year they added flat-tops to their model range. The J200.12 has 12 tonnes capacity and the J200.10 is a 10 tonne machine. Booms on both models start at 30m and can be increased in 2.5m increments up to 67.5m.

“So flat-tops are well-suited to the sub-350 tm capacity class, and demand for that class is there, and the market has been getting bigger and bigger.”

So Jaso are now building flat-tops as well as low-tops; and the market for flat-tops is rising almost as quickly as their towers. 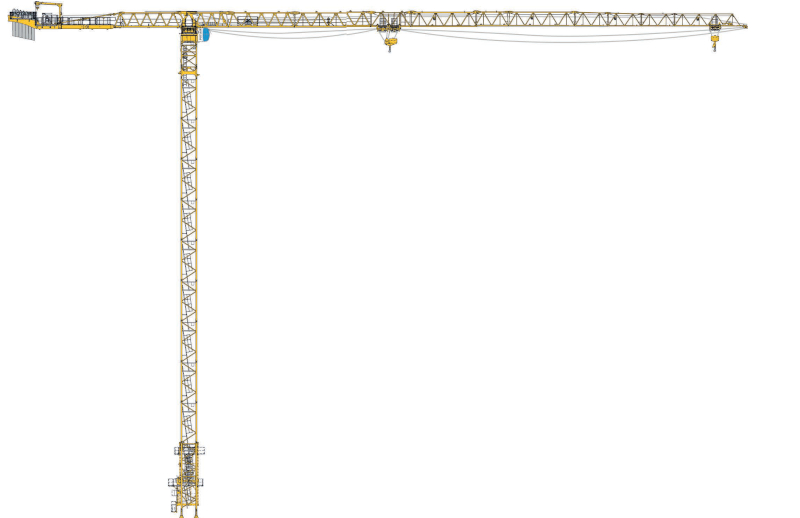 The Potain MCT805, destined for Asia 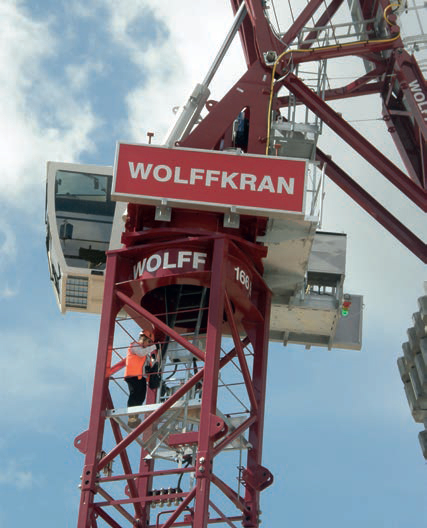 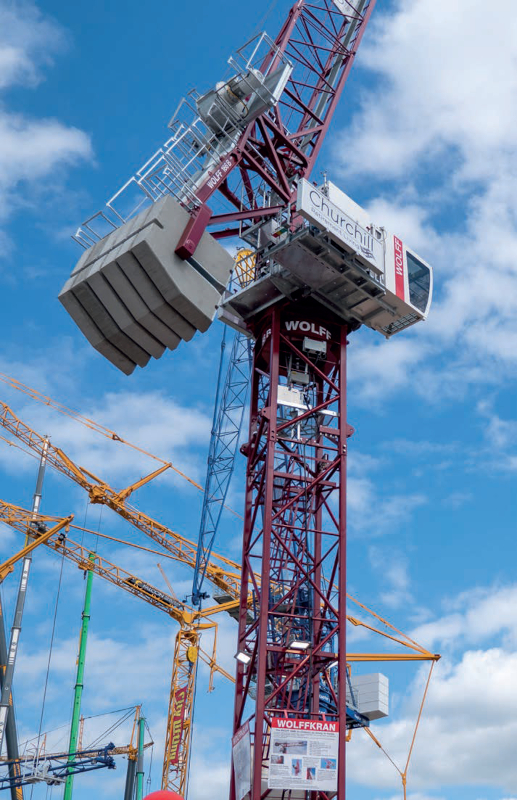 The jib on Wolffkran’s 166B can be raised near vertically 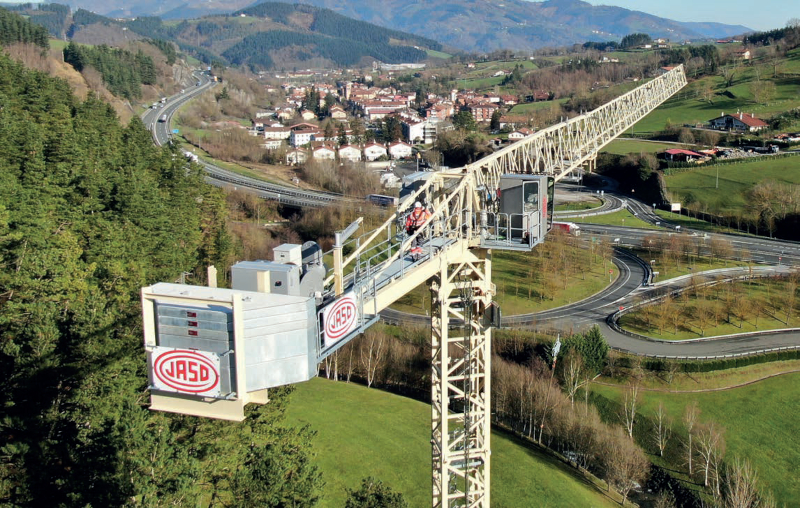 Jaso has entered the flat-top market