There are often good business reasons to consider buying second-hand rather than new cranes, although the market remains steady at best and sluggish at worst, reports Ian Vallely.

Search on Google for ‘secondhand cranes’ and you will be presented with almost 13 million results. There is, as this whopping figure makes plain, clearly no lack of information about the used crane market.

While there is plenty of information out there, however, there appears to be little consensus on the state of the second-hand crane market with mixed messages emerging from a number of movers and shakers in the crane industry.

Liebherr-Werk Ehingen’s Wolfgang Beringer, for example, is upbeat about the used crane market for his company, a global leader in the manufacture and supply of mobile cranes: “Our turnover in this segment is approximately 30% higher in 2019 compared to 2018. The demand for telescopic boom cranes from 30–1,200t is very stable.

“The demand for lattice boom cranes in 2018 and in the first half of 2019 was weak but improved well in the second half of 2019. And it is worth mentioning, that it is a worldwide demand.”

But Joost Bomer of Netherlands-based PVE Cranes and Services, which specialises in the rental and sale of large crawler and duty cycle crawler cranes, reports that, in his experience, the second-hand market has been very bad for several years: “There is a low trading volume and the prices have dropped up to 50% compared to 10 years ago. The outlook in the coming years does not look much better.”

He points out that most contractors purchased crawler cranes for their projects before the financial crisis of 2007/2008: “In that time, the value for cranes stayed high and reselling was very easy. After the crisis, selling cranes was difficult as projects decreased and getting finance for cranes became difficult. Since the crisis, rental has become relatively cheap with enough availability.”

He adds that more and more countries are applying a rule that means if a crane reaches 10 or 15 years old, it can’t be imported.

Wolfgang Pfister is head of strategic marketing and communications at Liebherr- Werk Nenzing, which manufactures crawler cranes up to 300t, plus foundation equipment and duty cycle machinery.

“Third markets are not strong enough; some big construction companies even bring machines back from third markets to the home market. The strongest markets so far are Central Europe and Latin America. We expect that the situation will be the same [in 2020].”

Currently, the demand for cranes in the United States appears to be negligible, mainly because of the large number of cranes on the market in North America and across the world, according to Eddy Kitchen, owner of new and used cranes and equipment dealer Kitchen’s Crane & Equipment.

He adds: “ The international exchange rate is a major f actor in not being able t o remove some cranes from the domestic market while we hope that some emerging markets will help to bring about a signal for growth to support selling cranes and other major construction equipment out of the US.”

Wood’s CRW Corporation is a US-based distributor of Link-Belt cranes, National boom trucks, and Maeda mini cranes with four branches that cover eight states in north eastern US from Pennsylvania to Maine. That’s where it sells its new machines. It also sells used machines throughout the US and Canada, and occasionally export machines to South America and Africa.

However, Chris Palmer, the company’s president and owner, says there hasn’t been much export activity lately: “The number one head wind is t he strength of the US dollar—it costs a lot of foreign currency to buy a used crane out of the US right now. Our used sales this year will be up o ver previous years, but it doesn’t take long with big ticket items for those numbers to move around.

“A big proportion of our crane division sales I would say is probably on average about 20% of our sales. Relative to excavating equipment there is less wear and tear and as longer life cycle so cranes do hold their market value better than some other machinery.

“This year we have had a little bit stronger lattice boom crawler crane activity than the previous couple of years. Larger boom trucks have always been strong for us. We also do a lot with used hydraulic truck cranes – there is a good market for those.”

But Palmer does not see a surge or significant drop off in demand for second-hand cranes: “I think current demand levels will be similar in the next year.”

Meanwhile, Tiemen Reitsma, international sales manager of crane rental company Hovago, has detected a pattern in crane types and capacities being sold or bought second-hand: “In the beginning of [2019], when the global wind market was at a down point, many large crawler cranes were put on the market for sale. This specific market is moving again and, as a result, the demand for big crawler cranes is growing again. Mobile cranes with a 160-250t capacity are also needed with these big crawler cranes as side c ranes.”

Wittrock Crane Trading receives inquiries from all over the world for its machines— mobile cranes, all terrain cranes, crawler cranes, and construction machines—with most inquiries coming from Europe and the Far East. However, says the company’s general manager, Marcus Wittrock: “America is weak, we couldn't even sell to Russia.”

He adds: “In general, everything is for sale and the demand is based on the needs of the customer. Certain markets (for example, India) are looking for very old and cheap cranes; other markets (Western Europe) are almost like new machines. But it also always depends on the customer, commitment, and budget. There is no general pattern.

“As a rule, we sell ‘as is’, without any guarantee. But there are also customers who would, for example, like to have new paintwork or certain retrofits. In general, the used crane customer wants to have complete equipment and actually pay little for it.”

Clearly, the type of crane has a significant bearing on how each used crane market is performing, but there are a number of factors that determine whether companies buy new or second-hand. The most common is price; as Liebherr-Werk Nenzing’s Pfister points out: “Many customers prefer having a premium product/brand but cannot afford a new machine. That’s why they go for a good used one.”

Fast delivery is also a significant reason for buying second-hand, as Hovago’s Reitsma explains: “If a crane is urgently needed, buying a new crane can’t be an option as it can take a substantial amount of time before the crane gets delivered.”

For Kitchen, every company is different in its approach and thought process for purchasing the various size, model and types of cranes: “Buying a new machine often times lends itself to a certain crane feature or capacity in various configurations which provide a competitive advantage over the buyers’ competition.”

Other reasons for buying second-hand rather than new include flexible financing options, the fact that there is less fixed capital tied up in the machinery, and the resulting higher liquidity.

Routes to market in the used crane arena vary depending on the seller. Liebherr-Werk Ehingen, for example, sells most of its used cranes via its own worldwide sales organisation, directly to end users, supported by its online presence. Brands other than Liebherr are sold to used cranes dealers.

Used cranes available from Liebherr-Werk Nenzing are sold in the same, or a similar, way as new machines. “However,” adds Pfister, “talking for crawler cranes and foundation equipment, the challenge of availability is much higher in our business since we are in a niche market.

“There are many developing markets that are not (yet) willing to pay for a new machine; the machines needed are either not available or not available ‘long enough’ until the purchasing decision is being taken.”

Kobelco holds auctions, typically three times per year, at its yard and its stock list is posted on the website. In addition, it contacts customers by e-mail and telephone.

Determining the price of a used crane, meanwhile, appears to be something of a bl ack art. The factors determine value for money in a used crane include condition of the crane, year of manufacture, mileage, hours of operation, freight costs, engine type, emission performance, scope of supply and number of owners as well as market situations and the availability of cranes, both new and used.

However, says Hovago’s Reitsma, there is no s et formula for depreciation of a crane: “It is strongly linked to the market circumstances. The petrochemical, wind and construction industries, for example, each have their specific types of crane. When a market is down and the demand for cranes is low, it translates into higher depreciation. On the other hand, when a market is steady, it results in higher residual values.”

Wittrock agrees: “The loss in value is greatest at the beginning and diminishes over the years. It's like a car: approved and the key turned over, the car is worthless. There is no general calculation. It also depends a lot on supply and demand. A reasonable assessment can only be considered in individual cases and can only be given by an expert.

“Many factors play a role, such as manufacturer, type, age, condition, functionality, freedom from accidents, overall impression, number of previous owners, repair backlog but also country of origin. And, in the end, it is a question of supply and demand.”

Wood’s CRW’s Palmer likens determining the price of a used crane to surfing: “Sometimes you catch the wave of demand and sometimes you crash and burn because you have missed it. It may be that we get a fair demand looking for rough terrain cranes and that lasts for a few months, and then that demand is satisfied and then demand is tepid for the balance of the year.

“The key thing for us is to continue to keep our fingers on the pulse – we track option prices and our territory managers give us good feedback on what customers are looking for and that determines whether we decide the wave is building or is about to crash.” 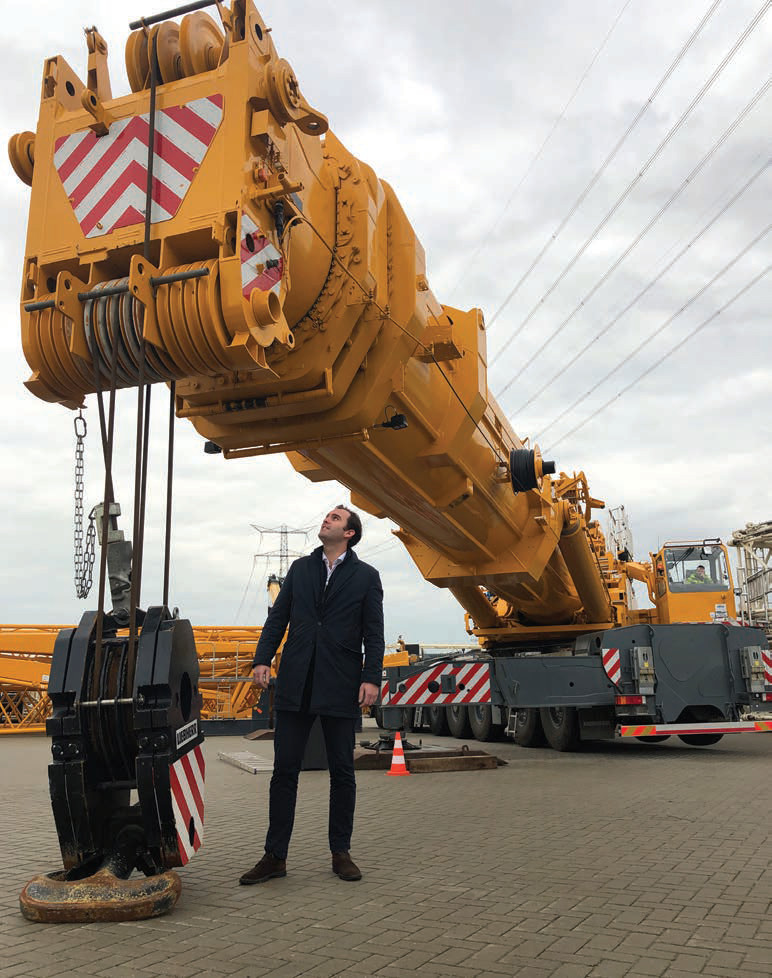 Tiemen Reitsma of Hovago, with one of the company’s used cranes 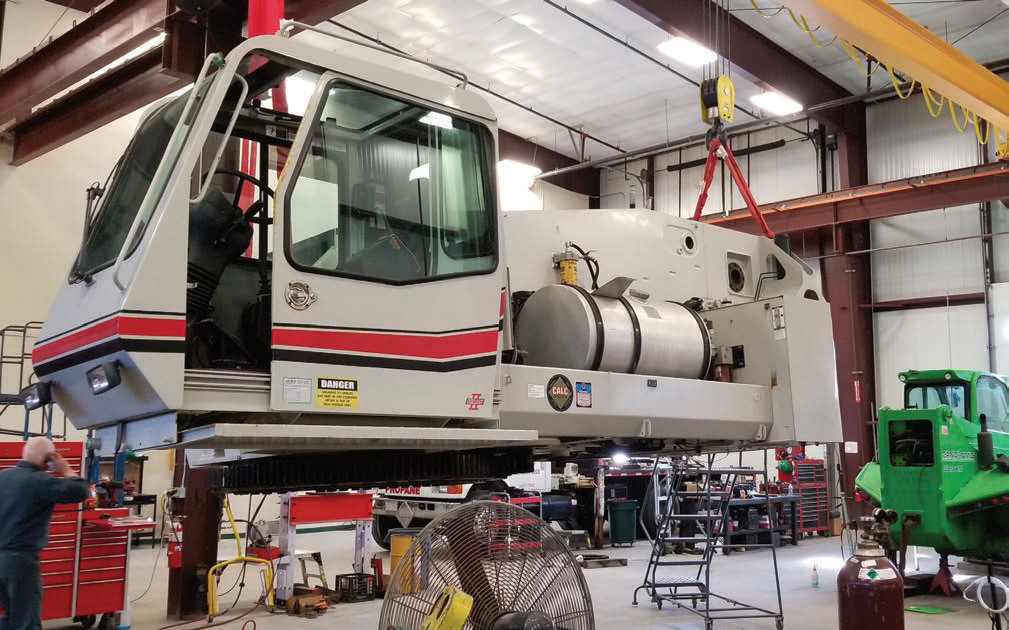 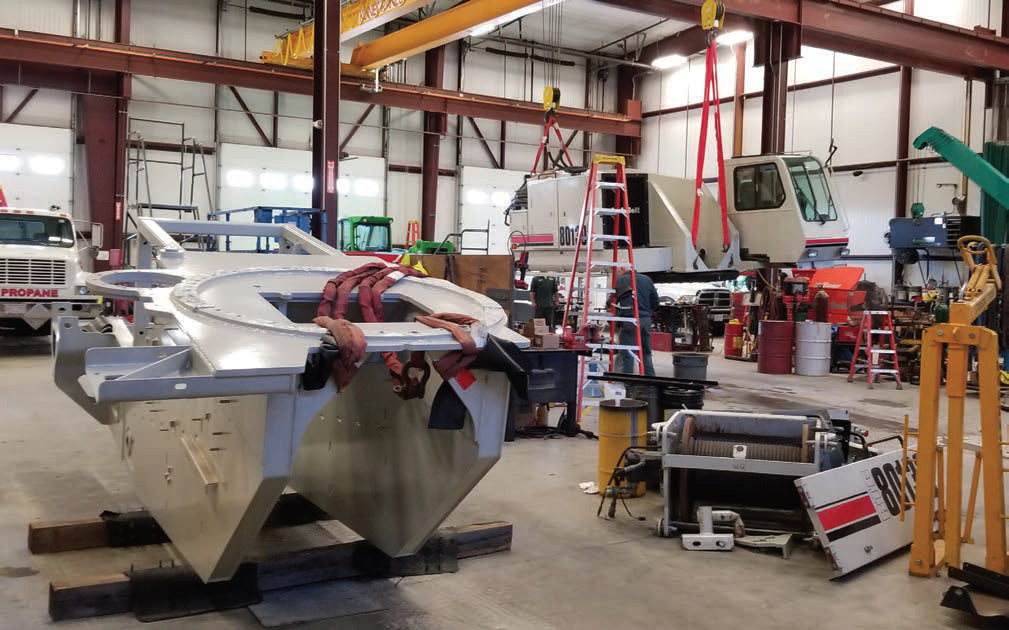