Scheuerle’s new STB550 was picked up by Lincoln Collett, technical director of Collet Heavy Transport. Will North spoke to his brother, managing director David Collett, about why the company chose this system.

Demand for bridge girders has been driven by continuing growth in the power generation sector, and increasing infrastructural challenges, David Collett says.

Collett is managing director of Collett & Sons, the parent company of Collett Transport. He is also president of ESTA, the European association for mobile crane and special transport owners.

He says, "For us the main market for the bridge girder is power generation. Demand is coming frpm manufacturers of transformers and turbines. The trailer bridge itself is designed and constructed fro use anywhere in the world. It's modular, transferrable and transportable."

Collett is based in the UK, but often finds itself called on to transport transformers from manufacturers across Europe.

Collett says, "Our initial focus is on the UK market, but the bridge girder is easily transportable for material coming into the UK from Europe. We can mobilise it to the manufacturer, and then build it up to the format needed, depending on the size and weight, and vehicle load for mobilisations and then transport the load from there. When it gets to the destination, depending on where that is, we can either strip it down and demobilise it, or bring it back in two parts.

"Suppose we were delivering to a power station in the [British] Midlands, we'd just take the trailer back in two large pieces. If we finish in Sweden, we would find it easier to demobilise it into smaller parts and bring it back in trailer loads. In that situaiton, only the load spreading part needs special transport"

Demand for the bridge girder looks sets to rise. Collett says, "We're anticipating growth in the requirement for girder sets. This is partly due to infrastructure problems for transporting heavy loads, and also because more and more structures like bridges are de-rated and need a girder set solution rather than a multi axle solution. In some cases, suppose we had a 200t transformer, it would just sit on top of axles. The weight concentration there is over the axles, on a relatively short wheelbase. The weight concentration is just over that one module of axles. Now we're getting a lot more situations where structures are being refused, because of those loading scenarios. The weight concentration fails on the structural strengths of the bridge. With a girder set, you're setting the weight over a much longer distance. The girder suspends between two modules of axles. For some cases, this is an advantage for the structure owner as it spreads the weight over bridge longitudinally.

"There are some small disadvantages. The trailer itself is bigger and more complex. The tare weight increases, but the bare fact is you put more modules in to spread the weight.

"Power generation and grid infrastructure is continually being maintained, and upgraded, and so we see the transformer market will increase in the future as well.

The power generation industry is also at a point where there are new power stations to be sourced and constructed, and the girder set would be available to move transformers and generations."

Having recognise the demand for bridge girder sets, why did Collett choose Scheuerle's system? Collett says, "It's the only system I would consider to be truly modular. This is a newly designed and engineered product from Scheuerle. The whole bridge system is modular, so if you have a six-metre long transformer, then the set would be different for a 12m or 14m long transformer. We can construct the trailer to be better configured, so it fits better and optimises its transport dimensions on the road.

"This is the only one to my knowledge that is available where you can do this. The neck beams, deck beams, are modular as are all parts of the girder bridge. You can add and subtract as you see fit, as you require for each different transformer. We've got a couple of different beam options, with a 350t and 550t beam. This demonstrates the flexibility of the modular design."

As well as the girder set, Collett bought a power pack unit (PPU), used at the back of the system. This, Collett says, helps keep the weight of the system down, while providing benefits on the road: "We've got a power booster, which turns the dumb modular axles into an SPMT. The power module acts like a pushing tractor, and you don't need another tractor at the back. It makes it shorter, and easier to operate, with less total train weight.

"All you add is the extra 5-6t weight of the power booster. Compared to a conventional SPMT, the difference is that on an SPMT, you have some driving and some braking. On a normal modular trailer, you just pull with the tractor and transporters are dumb, they're just used for breaking through the normal air system. With the power booster, out of those module of axles, you've got a clever module that has driven axles, like a cross between an SPMT and modular axles. It acts as a drive, and with a compressor on board, gives you extra capacity for braking."

The bridge girder solves many transport problems, allowing ever bigger transformers to be transported across structures that would otherwise be impassable. But driving a vehicle of this scale isn't a simple job. Collett, says, "With something as big as the girder set, you have a gang of engineers. You have trailer operators and engineers with it. The back module has its own cabin, where a second operator monitors progress from there and can control how to trim the girder set as you travel down the road. There's an amount of automatic steering, but like any other modular trailer, when the auto-steering geometry doesn't work for the layout of the road, then you have to manually steer." 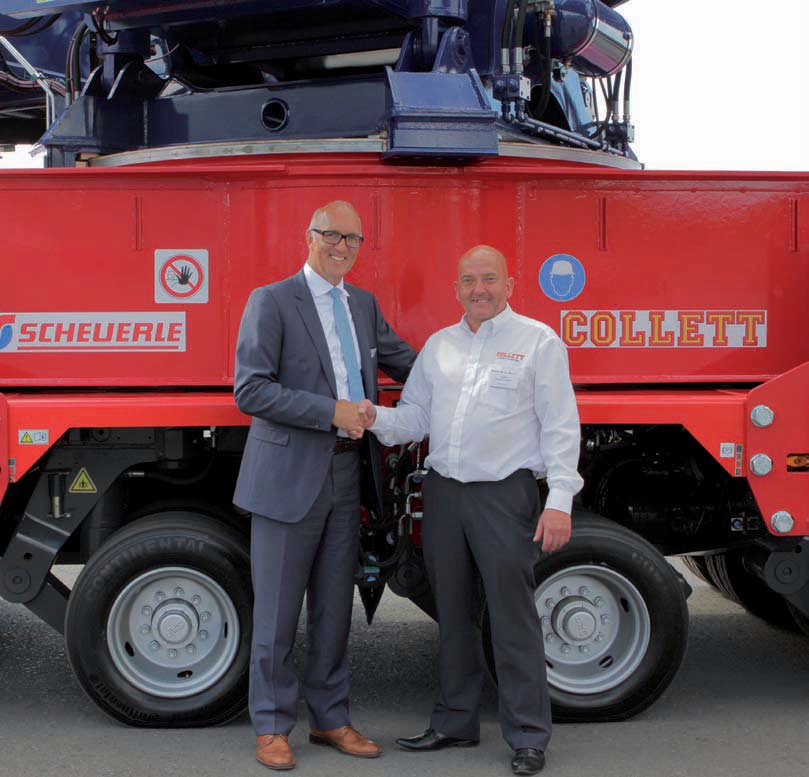 Bernd Schwengsbier and Lincoln Collett at the handover