This month Cranes Today takes a look at rigging products developed for wide-ranging industries including light construction, oil and gas, and salvage. The Versabar Claw is designed to quickly remove sunken topsides offshore. Other companies focus on lighter loads, such as Pemco, offering a pipe safety hook. For lifting light loads without electricity, we interview Global Track on a new hook for its manual overhead crane.

Versabar
The Claw, an underwater lift device, is the latest innovation of Versabar, a provider of heavy lift solutions and custom rigging.

It engineered, fabricated, tested, and deployed the Claw for use with its VB 10,000 gantry in just eight months in 2011.

It is intended for offshore operators looking to minimise diver exposure during salvage operations, and retrieve topsides from the sea floor with minimal subsea preparation.

The Claw picks up topsides, places them in giant baskets and floats them to the surface, where gantries then manipulate them. Placing the eroded topsides in baskets prevents stressing the structures.

The Claw consists of two clawlike structures side by side, each measuring 122ft tall, 112ft wide, and weighing 1,000USt.

This passing September, the VB 10,000 used the Claw to remove five sunken platforms in a four-day span.

The Claw was used this September for retrieving five topsides from the Gulf of Mexico that were sunk during recent hurricanes.

The result was recovery of approximately 3,500USt of hurricane debris.

Versabar said: "Controlled by the VB 10,000 lift system, each set of massive steel jaws operates independently, but for larger loads, can be used in tandem for a double claw lift. "

The system is used with large underwater baskets called 'cradles'. Versabar said: "The cradles were designed with the flexibility of being lifted either by the Claw itself, or by using a rigging setup consisting of two specially-designed pipes. The versatility of the Claw's design allows for customisation according to each lift project, resulting in quick, efficient recovery."

The Claw has picked up an award for engineering in the last few months, the OTC Spotlight on New Technology Award in 2012.

Versabar says that after lifting steadily throughout the calm season in 2011, the VB 10,000 is currently undergoing routine maintenance and upgrades in preparation for the 2012 lift season.

Cargotec
Cargotec has developed a new smart device for cargo handling, the MacGregor Active Rotation Control (ARC), which it claims can reduce handling times by 20-30% during ship loading operations.

Designed as an alternative to the power swivels typically used for ship loading operations, the ARC tool consists of an electrically driven power swivel fitted with a cutting-edge frequency control system that is coupled to a motion reference sensor.

After an operator has programmed the ARC with the alignment needed to place cargo into its final position onboard a ship, the reference motion sensor continuously monitors the load's alignment, relative to its final resting position, throughout handling.

Feedback of this information from the reference motion sensor allows the variable frequency-controlled power swivel to account for the crane's movement and external effects, such as wind and choppy waters, to maintain the correct alignment

Explaining the benefits of the ARC, Cargotec's sales & technical support manager for marine cranes, Magnus Södersten, said, "Cargo positioning or spotting may easily account for as much as 40 percent of the total crane cycle time, especially when slotting unit loads such as containers and pulp spreaders. Anything which helps to reduce the spotting time can therefore yield a big gain in productivity and energy savings."

The ARC system can be retrofitted to any new, modern MacGregor crane.

The Safety Pipe Hook was designed to safely pick up and lay down pipe and tubing.

It has a safety latching mechanism not common in the world of lifting hooks, the company says.

The Safety Pipe Hook is spring loaded, allowing the pipe to be loaded (hooked) into the pipe hook without having to press the trigger mechanism.

After loading the pipe, the spring loaded latch rests against the inside stop of the hook, keeping the pipe securely within the pipe hook.

It is designed for the pipe coupling to rest against the side of the hook. Pulling the trigger opens the latch, releasing the pipe.

The trigger guard protects the user's hand and also acts as a slide guide when loading pipe into the hook.

Pemco offers the Safety Pipe Hook in different sizes comprising 2.4in, 2.9in and 3.5in pipe hooks for upset and non-upset pipe.

The company says a shorter handle version is available for use as a general safety pickup hook, such as picking up tubing tongs. Additional sizes of the Safety Pipe Hook are available upon request.

Safety Pipe Hook assembly has been tested to pick up and hold a maximum of 2,800lbs. The certification process included pull testing and maintaining 2,800lbs from the Latching Pipe Hook for 24 hours. It is designed to pickup and to hold a specific size of pipe, the company says and warns users to use the correct size Latching Pipe Hook with the respective pipe size.

The Safety Pipe Hook should be changed to accommodate a specific size of the new pipe in a particular application.

The launch for the new hook, pictured as a plastic prototype, is planned for sometime after May, said McKay.

"The trolley has not been released and is due to be released now. I get the tooling on the 5th May and will start production. I hope to sell 30,000 trolleys in the first the months.

"As soon as I get some production we are packaging a set of components in a box as a sales kit. These will be available at about $10 a set, although I do not have a firm price as yet, may be more may be less but I doubt it will be less."

Global Track has been searching for a Chinese production partner for the hook in recent weeks. The project is being coordinated with a business partner based in Hong Kong.

"The crane and hook were developed before I took my partner on. We started the partnership August last year," said McKay.

Global Track's eponymous manual crane has been on the market for about seven years, although two years ago it started producing the wind turbine maintenance hook, Turbo Hook, for taking pitch control motors in and out of turbine nacelles.

The idea for the Global Track manual crane came from McKay's crane testing practice, when he found it was hard to find a crane that could move with a test load.

McKay said that the system moves 2t with 20kg effort, and may be used with 15m bridges.

Gunnebo Industries
Gunnebo Industries announced earlier this year that it has extended the number of Gunnebo Johnson block ranges on stock at its central warehouse in Gothenburg, Sweden to ensure availability for immediate delivery.

Gunnebo Johnson blocks include snatch blocks with swivel shackles and snatch blocks single sheave with hook. Blocks are CE marked for the European market and run from 2t up to 20t.

Derrick blocks, sold with a galvanized finish are available with load capacity of 4t and 12t. Swivels jaw-jaw are offered from 3t up to 19t, with 4:1 design factor.

Gunnebo Johnson blocks are the perfect complement to the Gunnebo Lifting product range of shackles, the company says.

Gunnebo Lifting has a long tradition of manufacture in Lonevåg, Norway, going back at least 50 years.

Its lifting equipment is used by crane manufacturers and clients in industries including oil and gas, steel, mining, construction, logistics, and fish farming.

All Gunnebo Lifting shackle manufacturing is done in-house, from the design stage to forging and heat-treating.

Its shackles are made from a range of steel qualities, including stainless acid proof steel and highgrade alloy.

The ability to control all critical processes during the manufacturing assures the highest quality, and a production speed customisable to client demands.

While all Gunnebo Lifting shackles are marked according to standard, the shackles can be marked uniquely as per DnV 2.7-1, if required.

Certificates and technical data files can be accessed online by customers, the company says.

Gunnebo Lifting has subsidiaries on every continent, it says, in order to supply the products, provide training and technical advice.

Gunnebo most recently showcased various products from its rigging ranges at Conexpo Russia in May, where the firm said it had a successful show. 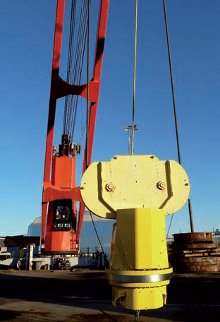 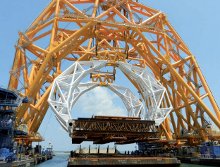 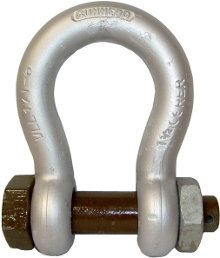