What used to be 'ultra-heavy' is today’s 'mid-range'; what is out of the question today might be possible next year. Gavin Kerr, global cranes director at Mammoet speaks to Julian Champkin about developments in the world of heavy lifting.

Heavy lifting has goalposts that are always receding. Once upon a time we could define a heavy lift as anything over 100 tonnes. For this article we shall talk instead of 1000 t and up.

Gavin Kerr is responsible for lifts like that all the time. He is global cranes director at Mammoet, so that perhaps is hardly surprising. “The thing about heavy lifting,” he says, “is that it starts with understanding.” Not understanding of the weight of the load, or its size, or its centre of gravity though, of course, you will be in deep trouble if you do not understand all of those. “But understanding of what the client wants. What are their ambitions? What do they want to achieve? And what do they want to avoid?”

“It might be about time: they may need the job to be done to a time limit so that they can hit first production before a licence expires. It could be about space: the laydown room might look great on paper but will we be interfering with all the 20 other contractors who might also be relying on using that space at that moment? It might be about availability of resources: some clients may want to have 25% reserve of lifting capacity available in the back pocket, so to speak, whereas for others it may be that they really are sure of the weight and dimensions of their load and are less risk-averse when making assumptions about unknown variables. So it is about more than the mechanics. You have to think in the big picture.”

A heavy lift, he says, is like a marathon. “Onlookers think it is all about the four, six, or eight hours that it takes to run the race. But it is actually about the months and the years of training that you have put into it beforehand. That’s where the effort goes and where the success comes from.”

A heavy lift of, say, a 3000 t regenerator vessel can take two years in the planning. That is, if you are lucky. “If you are only involved a few months before, you are forced to work with what is in front of you. Your ability to influence things like lifting points and the on-site methodology is limited. But if you are involved say two years ahead, when the module is still at the design stage, you have more ability to influence things. Maybe the designer has put in 16 lifting points; the rigging arrangement for that means the hook would have to be higher. So we might say to them ‘can you put in just eight points?’ This will lower the hook height and so give access to more of the crane’s lifting capacity, but now they need to structurally strengthen the module to absorb the extra forces, and that will increase the weight. And it will also come with a lead time and a price tag.

"The more we are in dialogue with each other around these types of topics, the easier it is to converge on an optimum solution in the end for the customer who is paying the bill.”

It is simpler, he says, to lift new-built structures than the old ones they may be replacing. “On a new reactor vessel or topside module, or whatever, the design drawings will tell you the volume of steel, and you know the density of steel, so you can work out the weight. And there are computer programmes that will work out the centre of gravity to the millimetre.

“But on an old cat-cracker reactor vessel, for example, the design sheets may long since have been lost, there may have been unrecorded strengthening panels welded on over the years, its walls will be lined with 50 years worth of accumulated residue... There are more unknowns.

“And on lifts this heavy you really do not want to come across anything unexpected. Anything up to 15-20 people can be involved in the lift itself, and their safety is paramount. These are not the sort of lifts that you can adjust on the fly. You really want to know every meticulous detail well ahead of time in order to be sure that once the operation started you are going to feel comfortable and at ease, because an accident or the consequences of a poor safety record would have just enormous consequences for everybody involved.”

Mammoet, of course, needs big cranes – very big cranes indeed – to do these tasks. They have their new Focus 30 crane - their own design - which can lift 2,500 tonnes and which made its debut last year, on a refinery site in the UK. Its boom builds vertically – a response to changing conditions for petrochemical and civil industry customers, where the trend is towards building from smaller footprints. Is designing a crane like this the same as designing a normal crane only several times larger or do other special factors creep in as well?

“But we design our cranes, we don’t manufacture them. As with anything in the construction industry the trick is: ‘How do you translate something that appears feasible on paper or on your desktop onto something that someone can actually build?’ There is always the bridge between what is designed and what you can actually deliver.

“On a super-heavy lift crane like the Focus you have to ask 'is there a manufacturer that makes bearings of this size?’, 'is there a producer who makes wire ropes at this diameter?', and 'do they have a test bed at their facility that enables them to certify pieces of this weight?’. It is about finding that sweet spot between practicality and what you can design.”

The trend for many years in all kinds of engineering has been to build prefabricated modules as large as possible before moving them, to minimise assembly on site. Oil platform tops as large as 10,000 tonnes are being moved, from shore to ship to offshore platforms as single units. How much bigger, and heavier, can lifting get? Are we approaching the practical limit?

“I don’t think so," says Kerr. "If you talk about modules, methods of moving them have moved from cranes towards SPMTs, and land-based cranes are not really used for anything over 3,000 to 3,500 tonnes. In principle we can put as many SPMT trailers underneath [heavier modules] as possible; but then you wonder ‘are the ships that you need to transport them available?' or 'are the fabrication facilities that are needed to build them already out of capacity?’ Cranes are not the only bottleneck.

“But then consider offshore wind, for example: that is perhaps the new frontier of growth in terms of size and weight. Go back only ten years: units of three to six megawatts were normal. We have now erected prototypes at 14MW, with plans to erect and test prototypes in the 16MW- 20MW range, which will likely be commonplace by 2030. Three or four years ago the monopiles were 1,000 t or so maximum and they couldn’t get any bigger; then they made an XL monopile; now we have XXL monopiles of up to 2,100 t and they are talking of XXXL monopiles of 3,000 t and up.

"There are more (offshore) decommissioning than new installations in oil and gas," adds Kerr. "Offshore investment has shifted from fossil to renewable. The energy transition is really in front of us because a lot of the work at the traditional offshore yards is now renewables-based. What used to be oil and gas platforms are now substation topsides for offshore wind generation. We have loaded out several examples of these over 1,000 t recently, and three of our PTC cranes are now working on offshore wind projects."

"So every time that you think you are coming to the limits of what is possible the technology just continues to find efficiencies. And especially when it comes to these energy projects, getting sustainable energy and lowering its cost is all about economies of scale in the end, and that is certainly the case with offshore wind. I think the entire value chain needs to catch up a bit in that respect and invest in the future of that segment.

"And that is something that we are doing at Mammoet. We have recently started the engineering phase of our SK 6000 crane, which is our next big product. It will be the next evolution of the SK series and will deliver at least 40% additional lifting capacity on top of the SK 350 in common use case scenarios.

“There is a temptation to think that heavy lifting is boys with big toys. But that is not the attraction for me; it is more about what we are able to make possible with them for society. For the Seagreen project, an offshore wind farm due to be located 30km off the east coast of Scotland, we are loading out jackets for what will be the deepest offshore wind farm in the world. We are working on the Hywind Tampen project in Norway which will be the largest floating wind farm ever in the world. Our cranes are unlocking bottlenecks, which helps designers capture the economies of scale so valued in renewable energy projects, for example, by allowing simultaneous load-in and load-out of jackets; regardless of tide conditions.

"If it's installing bridges, you know you are connecting communities; if it is chemical complexes then we’re helping computing and healthcare industries to move forward.

"We are sometimes a little bit over-obsessed within our industry with having the biggest crane and the strongest crane. And, of course, that is cool, and I take great pride in Mammoet’s large cranes; but we should really go back a little bit to the basics of why we are developing these products and why we want to be capable of doing these absolutely spectacular engineering projects. It serves a higher purpose actually. And for me that's where I find my calling.

"The lifts are nice but, more important, it is helping our clients ultimately to realise their ambitions to have a big impact on the way our children, and our childrens’ children, live. This is where I get the most pleasure. ” 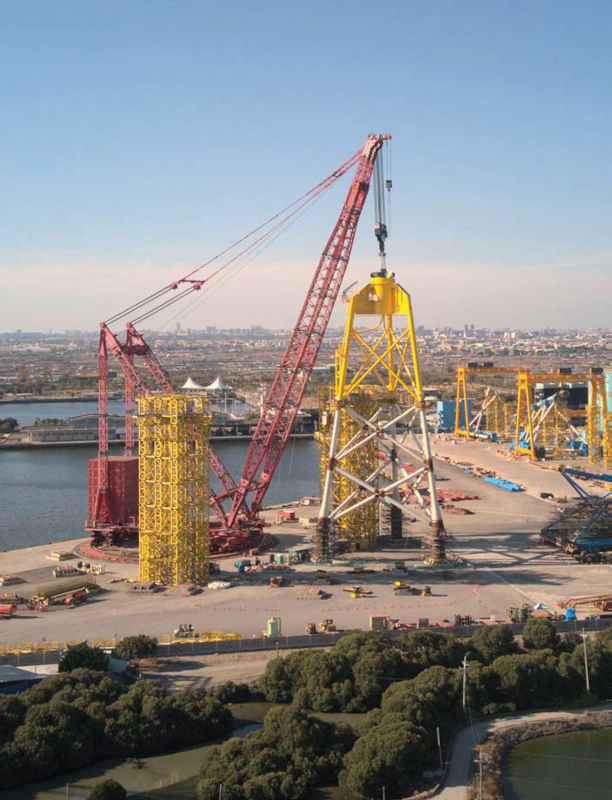