Weldex has used a 1,350t Liebherr crawler to lower a tunnel boring machine for the new Crossrail line connecting London's Heathrow airport in the west, with Canary Wharf in the east.

Joint venture Dragados Sisk was contracted to build tunnels for the eastern section of the project. The underground railway lines will run through central and eastern London.

The team in charge of using the LR 11350 chose a day without rain and wind to lower the tunnel boring machine (or TBM), known as Elizabeth, named after the Queen of England.

Weldex currently owns three of the Liebherr megacrawlers, and has recently been displaying the versatility of the 1,350t machines. The first is currently in storage at Alfreton, and is expected to be used at a job on the Drax power station in Yorkshire, England. A second is working at the dockside in Esbjerg, Denmark, on a long term project handling components for the Lincs offshore wind farm. The crane used on this project was bought with Liebherr's new P-boom parallel boom attachment. It will shortly be sent to Eeemshaven, in the Netherlands, to work on a project for another wind power company, RePower.

Weldex has had two more jobs using its LR 11350s in east London recently. Last year, it lowered a heavier, 800t TBM at 22m radius, into the Lee Crossing tunnel. Earlier this year, it supplied an LR 11350 with 96m boom and 84m luffer to erect an 80m high tower at 120m radius for the Emirates Flyer cable car project, being built by Watson Steel.

The firm will use a support crane to lift 10 gantries that form the back-up trailers of the TBMs and carry materials during tunneling construction.

Eight such TBMs are constructing a total of 21km of twin tunnels beneath London.

A team at a second site on Limmo Peninsula will shortly repeat the operation with sister machine, Victoria.

Both TBMs are scheduled for maintenance before tunneling toward Whitechapel, Liverpool Street and Farringdon stations in London. 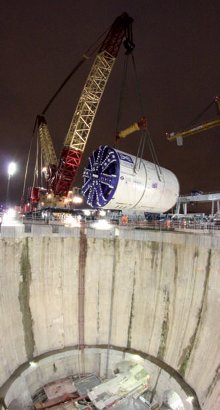 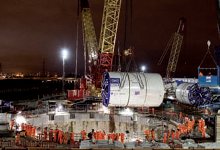