Who's on the right track?

Stuart Anderson, president of Chortsey Barr Associates, looks into the increased popularity of crawler-mounting and more specifically of telecrawlers. He also makes a comparison between telecrawlers and rough terrains in regards to market demand and day-to-day lifting work.

Fifteen years ago, Phil Bishop, then the widely-respected editor of this journal, analysed the issue of why Europe’s crane buyers made different product choices from the rest of the world.

For the main part, Phil’s analysis discussed the all terrain and truck crane buying preferences of Europe’s buyers compared with the rough terrain preferences in North America and Japan. Much of the discussion focussed on types of crane buyer, owner-operator crane hirers buying cranes for local ‘taxi-crane’ service versus longer term contract hires in America and the need for more compact small rough terrain cranes in Japan.

While the vast majority of sales of all terrains were—and are— on the rise in North America and Japan, sales of these cranes in those markets are limited to larger sized cranes of 70-80t capacity and larger and consequently do not compete with many popular sizes of rough terrain crane.

Many years earlier when the rough terrain crane was a relatively-new phenomenon, similar comparative analyses were being made by crane salesmen; but in those early days the competition for the rough terrain on un-made job sites came from the tens of thousands of small lattice boom crawler cranes that dominated the mobile crane scene from the 1920s thru the 1960s.

Today, the small (15-50t) capacity lattice crawler crane has almost ceased to exist – except in very heavy lift or duty cycle applications, the only place you see a ‘lattice’ is in a fly jib. All of which goes to prove that in the crane business things change but generally very slowly.

Although anyone looking around Europe, America or Japan might not recognise it, small (15- 50t) tele truck cranes remain the world’s best-selling ‘mobile crane’ variety. The reason for this, of course, cannot be found in Europe, America or Japan. To discover the truth of such claims one needs to head to so-called ‘emerging economies’ – most particularly to China and to a lesser extent Russia where tremendous volumes of small tele truck cranes dominate the mobile crane markets.

This is a story of evolution. As crane markets develop, simple low-cost options (like lattice boom truck and self-propelled mobile cranes) initially dominate before eventually giving way to cranes that get their work done faster (tele truck cranes) and then ‘develop’ into a broader range of sizes and varieties - RTs, ATs, etc. And along the way new sub-categories emerge; truck-mounted knuckle boom loaders growing ever larger and demanding their share of the pot, ever more versatile fast erecting tower cranes, tele handlers and tele boom crawler cranes.

During the past twenty years in Europe and America wheel mounted telehandlers have emerged as a major competitor for rough terrains in the handling of light loads typically up to 20-to- 25m height. The growing success of these small rubber-tyred lifters is in contrast with a broader overall trend which, over many years, has seen more and more construction products turn to crawler-mounting. Interestingly this hasn’t happened in Japan – the reason being that their main application is residential housing and the telehandler never work in Japan’s cramped and traditional residential environment.

On a more general plain, over many years now, crawler-mounting has grown in popularity. What originally began as the domain of the tractor and loader, ‘crawlers’ developed as the preferred base for mechanical then hydraulic excavators and has subsequently spread worldwide through the enormously-popular skid-steer loaders (Bobcats) and now into crushers, mini excavators, every variety of foundation rig, mini crawler cranes, crawler haulers, crawler access platforms and fullsize telecrawler cranes. Go to any trade show and you’ll see crawlers literally everywhere. And along the way the adoption of rubber track belts, various plastic inserts, extendable undercarriages, remote controls, etc, has broadened their application.

Over the past year or two, you’ll have seen an increasing number of magazine articles extolling the virtues of the tele boom crawler crane - fairly reflecting their growing popularity and increasing share of the mobile crane ‘cake’. These trends are particularly interesting in a European context.

At one time, every European country had its own manufacturer of lattice boom crawler cranes – from Finland to Belgium, Switzerland to Romania, Denmark to Croatia, Sweden to the Netherlands. Not to mention the UK, Italy, Germany and France which between them over time supported over 100 manufacturers!

Twenty years ago, one might have thought that the day of the medium-sized standard-duty crawler crane was over. But just as people have been writing-off the old faithful truck crane, no sooner have we buried them but back they come. Not exactly in their original form of course, but ‘evolved’ combining the features that originally won their popularity with specifications that meet today’s needs. And while many of those traditional manufacturers have disappeared, probably never to return, the more resilient of the crawler crane maker – the likes of Link-Belt, Hitachi-Sumitomo, Sennebogen, Kobelco and Liebherr – have made the transition from lattice to tele boom - from mechanical to hydraulic. And in the process today’s crawler cranes have become much more environmentally friendly, safer, productive and user-friendly.

Although it may not be widely recognised, but in Europe there has been a steady upward trend in the sales of (full-size) telecrawler cranes in contrast with the persistently-limited demand for rough terrains. The only consistently important European market for rough terrains remains Italy. In other European countries such as the UK, Germany, Belgium and Holland, telecrawler cranes consistently outsell RT cranes. In addition, with the emergence over the past decade of a broadening group of manufacturers of telecrawler cranes with an evergreater range of sizes up to 220t, customers have more choice than ever before.

Indeed, it’s a fact that the only ‘category’ of rough terrain crane that has made any recent headway in Europe is the mini RT of 8-to-25-tonnes capacity. The nose-down Japanese rough terrains sold exclusively by Kato - with the majority sold in the UK. In part these are favoured because customers find themselves able to ‘road’ these compact cranes over limited distances rather than conquering any significant ‘rough terrain’ application challenges.

And there’s a contrast. Ten years ago the Chinese looked to make a big impact in the rough terrain crane business with the leading manufacturers developing complete lines of cranes, often using foreign design assistance. But domestically they didn’t take-off.

The natural instinct of Chinese construction machinery operators is to run their machines flat-out, 24/7. Running a rough terrain at full speed is not only a good way to cause the operator to throwup - but also to burn-out the tires, transmission and engine.

Obviously for regular, day-today lifting work, the argument between tele and lattice boom crawler cranes is an easy one to make, so let us look at a somewhat more complex and variegated issue: Telecrawler crane versus the rough terrain crane. Firstly, here’s our summary of the major benefits of each type: Comparing crane models of different types, models and brands always requires various levels of qualification and careful study of ‘the small print’ which sometimes is found in Operators Manuals and computer data rather than in printed sales literature. However, reviewing various existing makes and models reveals certain key differentials. In order to illustrate the general comparative picture we have made a comparative summary roughly-based upon popular 60t tele boom crawler crane with a best-selling 60t (70USt) rough terrain crane.

The load chart values illustrated here have been ‘rounded’ but are based on EN 13000 level-ground charts.

It should be noted that these relationships vary according to different makes, models and rating criteria and we recommend that interested parties conduct their own comparisons using current manufacturers data – always remembering that published load chart data is for guidance only.

It should be noted that telecrawler cranes typically have higher working weights than rough terrain cranes of similar rated capacity. Generally they also employ heavier counterweights but in the above case, machine weights less all counterweighting are very similar.

Rubber-tyred cranes often employ larger diesel engines than crawler cranes of similar lifting capacity. The need for higher engine output i.e. horsepower is generally created by their propel systems rather than their crane functions – except for cranes with higher-powered hoists (which is not the case here). As is wellknown the high travel speeds and gradeability performance of rough terrains is often treated with a degree of scepticism in ‘real world’ circumstances.

As will be appreciated in very tight quarters where 180° swing is involved, it is normally the counterweight tail that defines minimum required work space. Concerning minimum vehicle transport widths, smaller-sized rough terrains and telecrawlers of up to approximately 60t capacity are still widely designed to 2.5m to 3.0m minimum. When it comes to telecrawlers of 80t capacity and greater these cranes tend to have minimum transport widths of 3.5m or greater, while larger rough terrains benefit from somewhat narrower minimum widths of between 3.1 and 3.33m width. 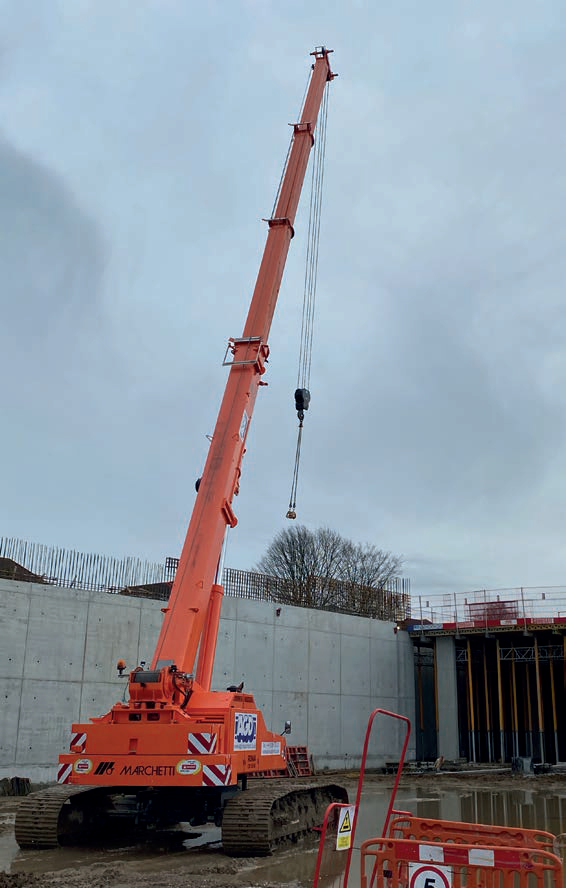 A Marchetti Autogru CW55.40 from AGD Equipment’s fleet at a jobsite in the UK. 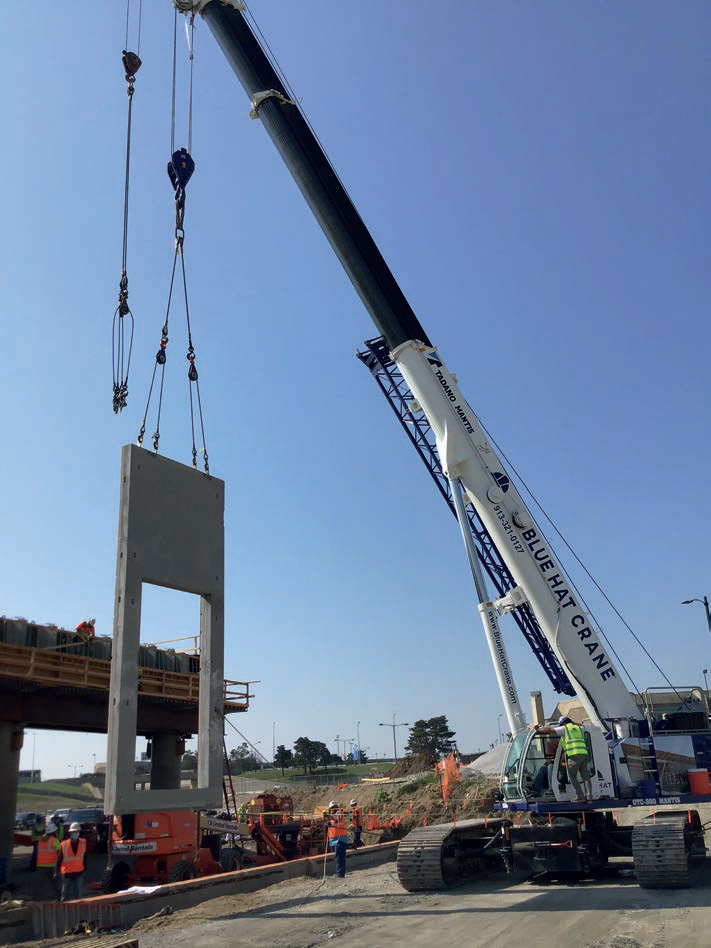