The Spacelift MC 35000 DLS, a new mobile marine crane with 1500t lifting capacity, is now ready for operation following a successful test lift. The heavy lift offshore crane has been developed by Zwagerman International and is installed on the Conquest MB I, a vessel owned by Conquest Offshore BV.

The Spacelift MC 35000 DLS is designed as a mobile marine crane, which means that the heavy lift crane is mounted on a pedestal foundation with a self-supporting foot frame that can be positioned on deck of a barge or vessel, Conquest Offshore BV said. The company added that this is the first heavy lift offshore crane to be built according to this design.

Conquest Offshore BV added that the dynamic load system enhances the load capacity of the crane. Four cylinders on the back of the crane are placed with bogies on an 18m diameter ring. The cylinders pull when a load is lifted and push when the crane is stationary to balance the counterweight. The capacity of the DLS is 1,000t and the counterweight is 450t. Together with the base structure of the crane this generates enough moment of force to perform heavy lifts up to 1,500t, the company said. 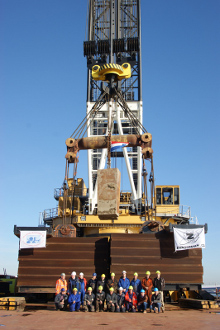