Comansa have built a bespoke tower crane for a ship-building yard in Norway. The company’s 21LC1050 has been working at the Aibel yard near Haugesund on the North Sea for just over a year.

Tower cranes for shipyards must meet stricter requirements than those for normal construction projects.  They are close to the sea with salt-spray and bad weather; vehicles and people swarm all over such sites; and they are used for many different lifting tasks rather than repetitiously for a single type of load. Comansa’s 50 t capacity crane had therefore had to undergo a detailed customisation process to adapt it to the customer’s needs.

To withstand the 400 tonnes force per corner that originate from a crane of more than 90 metres in a D25 wind zone, and to allow worker and vehicle transit around it, Comansa built a reinforced 10 metres portal, movable on rails, which was assembled by its Norwegian distributor in the yard. Special protection elements and 250-micron paint protect it from corrosion; the counterweights are protected with galvanised steel frames. The electrical cabinet is of stainless steel, and there is a wind-release system which can be activated from the base of the crane.

The 21LC1050 is a flat-top; installation in the small 600-700 square metre and windy space of the Norwegian yard gave logistical challenges. The yard itself lent its facilities and helped to pre-assemble the parts, which arrived in 32 lorries. A 500-tonne mobile crane with a height of 115 metres was used. The heaviest piece to assemble was 23 tonnes. Since assembly the crane has worked on constructing the Johan Sverdrup Phase 2 offshore oil process platform, the yard’s largest project to date, and had been used to lift very different loads 24 hours a day, seven days a week. Its 80 metre boom can cover every part of the platform. 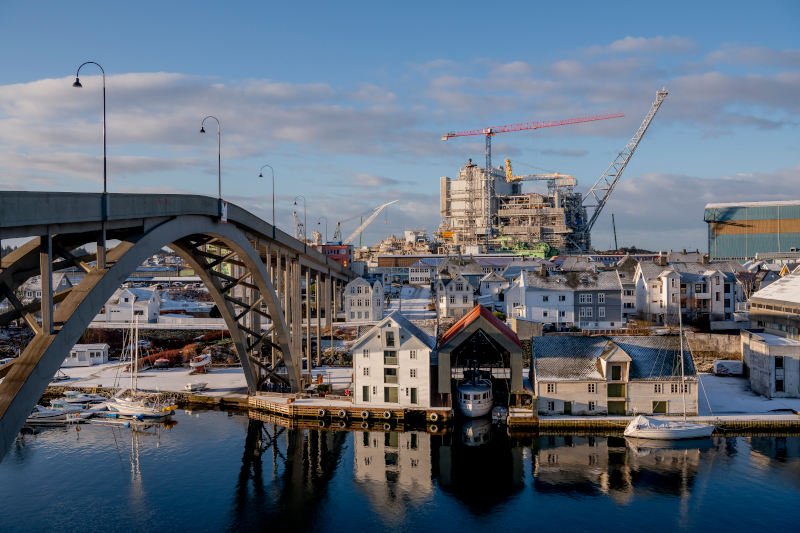