With the publication of the November 2022 issue we celebrate 50 years in the game, making us the original, longest-running industry title.

Cranes Today started life in November 1972. It was formed by founder publisher Ian MacLaren in conjunction with its first editor Chris Wilson, under the name MW Publishers. The duo had previously worked together on Cranes magazine under the ownership of Morgan Grampian.

When Grampian wanted to close Cranes (or, worse, merge it with sister magazine Muck Shifter) outrage from the crane industry convinced MacLaren and Wilson there was a continued need for a magazine catering just for them. And so Cranes Today was born.

To celebrate reaching this milestone, we’ve published our largest ever issue! In addition, we’ve gone to print slightly early than usual to benefit from maximum exposure at the long-awaited Bauma trade show in Munich, Germany.

Job of the Month

To celebrate turning 50 we take a trip down memory lane with some of the people that helped make Cranes Today become an enduring brand.

Stuart Anderson reports on key milestones in the evolution of modern mobile and tower cranes.

We ask a number of industry key players what their strategy for future development is.

How will cranes be controlled over the next 25 years? Will North investigates.

Bauma is here. We take a latest look at what’s on offer…

All kinds of devices can hang between the hook of a crane and its load, and they perform all sorts of functions. Julian Champkin reports.

We present the work of the Japan Crane Association.

Aerospace is one of the most technically advanced sectors in the lifting industry. Julian Champkin reports. 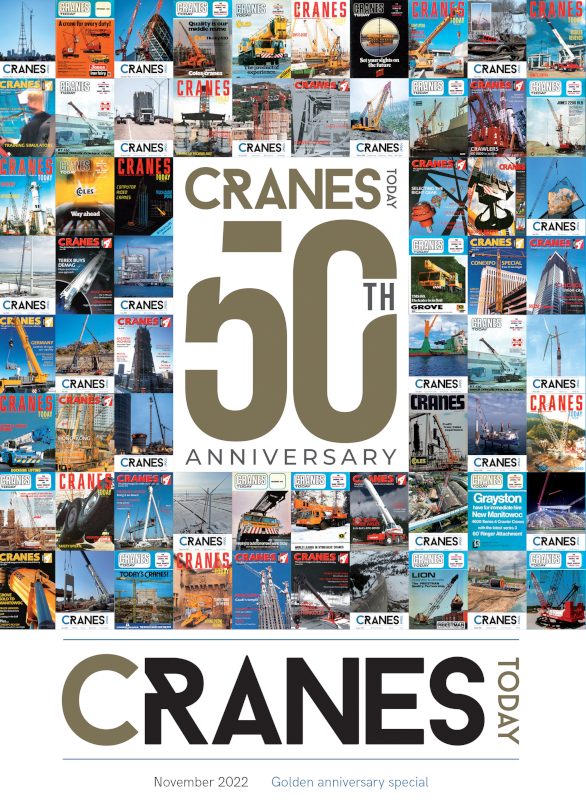