Liebherr has installed its first MTC 78000 heavy lift offshore crane, the most powerful machine yet produced by the German company and one of the world’s largest offshore slewing cranes.

The MTC 78000, the first of four ordered so far, was installed on the OSA Goliath multi purpose offshore construction vessel, which is being delivered by Handel Maritime SA to Mexican company Oceanografia. The crane has a maximum lifting capacity of 1,600t at 35m radius. This equates to a maximum dynamic moment of 78,000mt, with the crane capable of slewing over 360°. At a maximum radius of 74m, the crane can lift 530t. It is supplied with two auxiliary hoists with capacities of 50t and 500t. 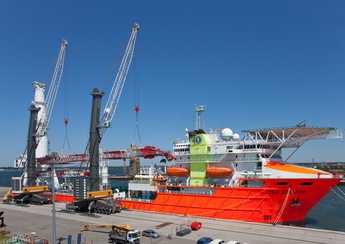 Installation required “several spectacular heavy duty lifts” of its own, according to Liebherr, who used their own LHM 600 mobile harbour cranes with 208t lifting capacities to carry out tandem lifts on loads up to 400t.

For the installation of the mast upper section, the LHM 600s were equipped with tower extensions to enable them to hoist the load up to 43m above pier level, while a specially developed hydraulic pinning machine was used to secure the boom once it had been lifted into place.

Despite the sheer size and scale of the installation, a team of 50 Liebherr mechanics were able to erect the crane in 23 days.

Once installed the MTC 78000 was overload tested at sea with two water filled pontoons weighing 1,760t, or 110% of the maximum lifting capacity. OSA Goliath is to be used by Oceanografia for work in the Gulf of Mexico on behalf of oil company Pemex, and is part of an order that includes two CBO 3600-100 offshore cranes that will be used as auxiliary cranes and supply hoists.

The 87m-long boom is assembled

Overload tests are carried out at sea