Four of a kind for Silvertown Tunnel

The new 1.4km twin-bore road tunnel under the Thames will be the first in London in over 30 years and aims to improve cross-river public transport, while reducing congestion and air pollution in the area. Construction is being delivered by Bam Nuttall with sister company Wayss & Freytag Ingenieurbau, Ferrovial Agroman and SK E&C.

The tight site presented some operational problems, according to Elliot Hawkins, Sales Director, Hawks Crane Hire, “The main boom for both machines had to stay under the overhead Emirates cable car, which runs across the site, and also had to be slew restricted due to the adjacent Docklands Light Railway (DLR) lines running parallel with the site, with Kobelco's slew restrictors coming in very handy during operations.”

Working around the three main shafts, both CKE2500G-2s were used in a ‘muck away’ operation removing spoils from the shafts using a Geko Innovations’s TruckLoader Skip, which can weigh up to 26 tonnes, fully laden, says Elliot, with one also lifting excavators, loaded onto a ‘tray’, in and out of the shafts as well.

With the larger capacity cranes handling earth removal and plant movement on site, the 100-tonne capacity CKE900G-3s, which were both supplied with a 36.6m boom, were used by piling contractor Keltbray for the tunnel boring machine launch chamber, along with associated counterfort foundations.

“Both CKE900G-3s worked as tailing cranes,”, explains Elliot, “lifting the tailing end of the tilt bed, with a maximum weight of 24-tonne, where the T-shaped rebar cages were spliced together to make the 102 tonne, 32m long counterfort piles, which were filled with more than 500m3 of ‘low-carbon’ concrete once in position.”

Environmental concerns also played a part in choosing the Kobelco crawler cranes for the works, according to Elliot, with the company’s KCross remote operation management system, which is designed to help maximise machine efficiency and uptime, key to the decision making.

“Our client was especially interested in gathering as much information as possible on all four cranes’ diesel usage and emissions whilst they were on site, particularly as it was keen to reduce emissions as much as possible on site. It even ran a competition between the contractors to see how much money it could save while reducing fuel consumption.

“More importantly,” adds Elliot, “the information was not only useful during the project but will be used as part of its wider research into how emissions and fuel usage can be reduced on future projects.” 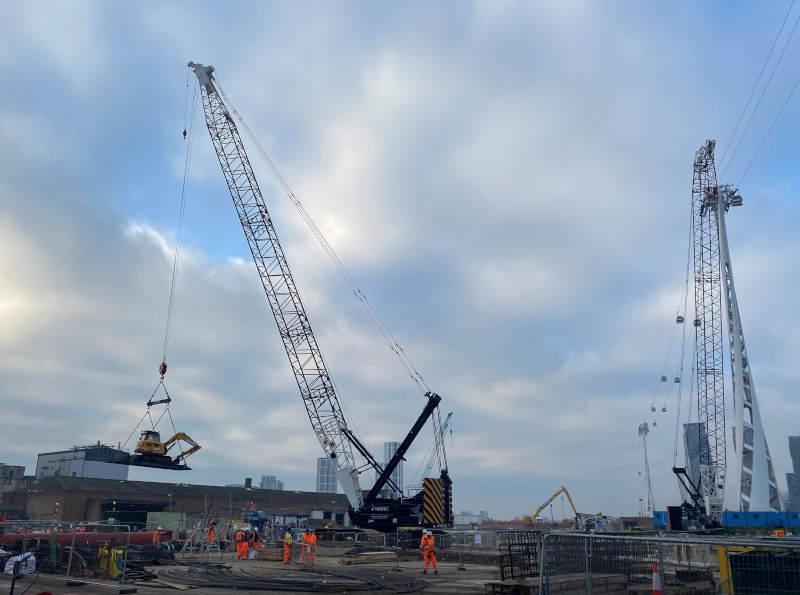 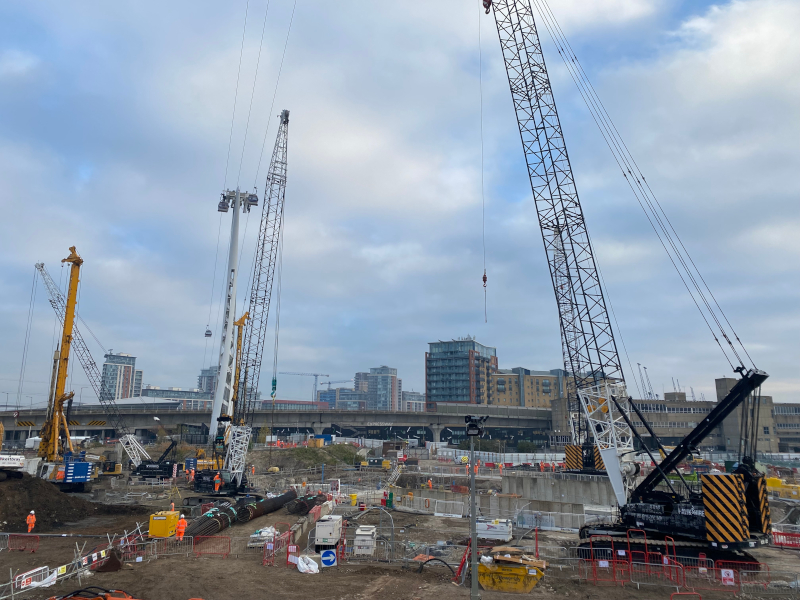