Malina Crane of the Czech Republic has performed a tandem lift using a Terex Explorer 5800 and an AC 250-1 all-terrain crane at a new sports arena in in Frydek-Místek, Czech Republic.

Malina Crane said limited space and an oversized 28t load measuring 30m wide had to be overcome when lifting the prefabricated steel roof structure into place at the arena in Frydek-Místek.

The AC 250-1 operated with a main boom length of 41m and 21m working radius, while the Explorer's main boom was telescoped to 42m at a working radius of 24m. These settings allowed the cranes to lift the load precisely to the required 18m height.

Malina Crane president Radek Malina said the project had also been useful to assess the fuel consumption of Terex's single-engine concept compared to a two-engine design.

Mr Malina said: "Now we have seen it clearly: the single-engine concept is in fact significantly more fuel efficient."

He said another benefit of the single-engine design was the ability to switch off the engine at any time during a job, without turning off the IC-1 crane control system. 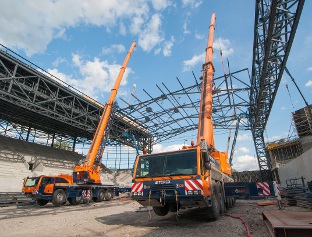