The transformer, measuring 8.7 m long x 5.4 m wide x 4.8 m high, was received at Ipswich Docks and temporarily put on a 12-axle flat-top trailer. From there Allelys used an 18 axle, 200 tonne capacity girder frame to transport it to Burwell.

The journey included the closure of the Orwell Bridge to enable the transport to cross without any other vehicles on the bridge at the same time.

Working alongside Highways England, Allelys arranged temporary traffic management on the A14 to remove the central reservation barrier and with two lanes closed on each side, the girder frame was able to cross, travelling against the normal flow of traffic and up the slip road, at junction 37, on the wrong side of the carriageway.

The heavy transport then needed to negotiate an intricate road network through the town of Burwell, before delivery to the substation.

Once on site, the transformer was jacked up using synchronised climbing jacks and positioned onto a turntable to be rotated, skidded into the bund and then jacked down into its final position.

The in-house engineering team supported the project to ensure that the abnormal load was able to successfully travel through the selected route by completing route surveys and swept path analysis. They also engineered a lift plan for the crane work on site.

“This project was particularly interesting to work on due to the route involved. It was certainly impressive to see the girder frame travelling solo across the Orwell Bridge,” said Zac Smout, project manager at Allelys.

“The knowledge and experience within the team, alongside the Allelys equipment fleet, were all critical elements to the success of the project.” 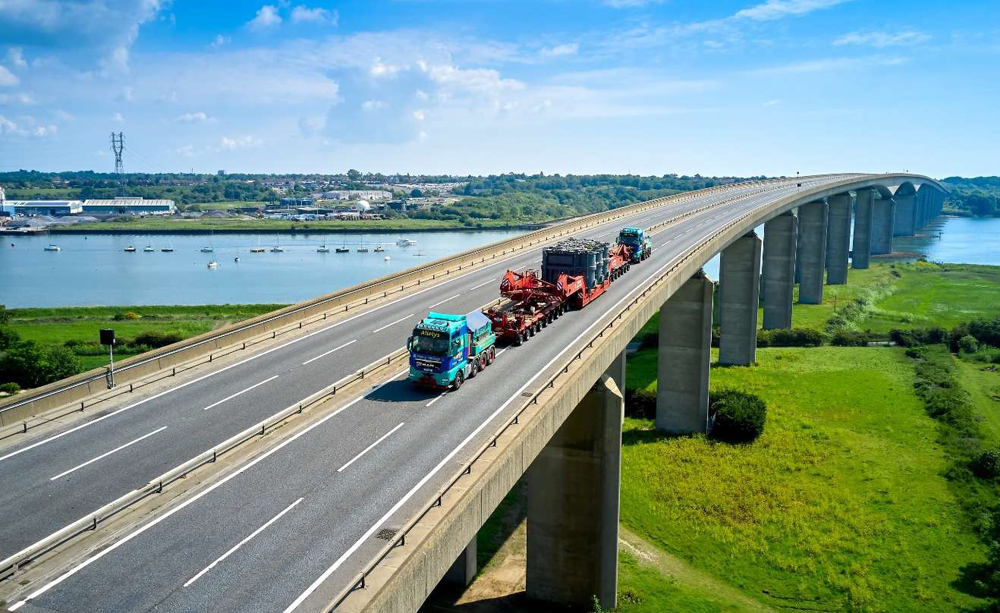