The project started last October 2021 and comprised loading two container Ship to Shore (STS) cranes from Malta Freeport terminal and installing them on the newly refurbished quay of the Mourepiane terminal within the Grand Maritime Port of Marseille-Fos in France.

Marseille serves as the global headquarters of the CMA CGM Group, the new buyer of the two cranes. The two STS cranes, built by ZPMC, were commissioned in Malta in 2007. However, they had recently been replaced there by two new Liebherr STS cranes. At the same time the CMA CGM Group’s Med Europe terminal was looking to strengthen its industrial base in order to support its growing container business. The CMA CGM Group therefore decided to use the capabilities of its subsidiary, CEVA Logistics, to transport the two cranes. CEVA's work in project logistics covers all aspects of the delivery and implementation of large-scale projects and it is experienced in these type of projects. Due to a busy period of work combined with the need for a quick relocation of the STS cranes, CEVA Logistics turned to Fagioli to manage the project as a whole.

First Fagioli chartered the ship Sun Rise from South Korean shipping agency Pan Ocean, as it was determined that the vessel would provide the fastest and safest method of transportation. The next step for Fagioli was to carry out structural studies of the STS cranes which had to be transported by SPMT on land and then structurally reinforced for transport at sea.

Fagioli says the structural study was completed in record time, and validated by an external certification body, in order for the parts needed for the structural reinforcement to be ordered in time. In the context of global tension in the steel market and fluctuating oil prices, Fagioli says this step was a major challenge for all the teams at work.

Work began on strengthening the STS Cranes in Malta at the beginning of March 2022. The STS cranes are 47 metres long, 27 metres wide and 79 metres high, with a total weight of 1650 tonnes.  Gantries were equipped with steel brackets necessary for SPMT bearing points on the inner side. These brackets were also equipped with the lugs necessary to attach the 2.5 tonne bracings that attached the STS cranes to the ship deck. On the outer side lugs were welded onto the cranes. In total, 12 points were welded to maintain each gantry. All moving parts that could deteriorate during transport were safely secured before the ship departed. The STS cranes were reinforced at the boom and in the transverse direction to avoid any structural deterioration during the three-day sea transfer.

At the end of March, two sets of Cometto 2 x 22 SPMT axle lines (88 lines in total) were assembled on the quay of Malta Freeport. The convoy included two transport beams dedicated to this project. The set also incorporated a jacking system to offer an additional 600mm stroke, necessary for the installation of the two STS cranes on grillage defined to limit the load of the STS cranes on the deck of the ship. Thus, in a continuous operation, Fagioli lifted, transferred, and laid both STS cranes at the +700mm level compared to the initial level of the quay.

Once set on the ship, the 24 bracings and the eight cross-braces were welded to the ship, and holding cables tensioned. After final check by the marine warranty surveyor, the ship set sail towards France.

The Sun Rise arrived in Marseille on April 8 2022 with the two STS cranes firmly anchored to the deck.

It took three days to remove all the fixings. The SPMT transport convoy was then reconfigured as two sets of 3 x 22 SPMT axle lines (132 lines in total). This configuration was necessary to meet a bearing capacity of the platforms of 4T/m2. The two STS cranes were unloaded and placed on their final rails.  The ‘ground side’ rail was installed a few weeks earlier as the 30 metre spacing of the two ZPMT STS cranes exceeded the 16 metre spacing of the existing STS cranes there.

The STS cranes are currently being reconditioned and adapted slightly. They are expected to be back in service by end of 2022. 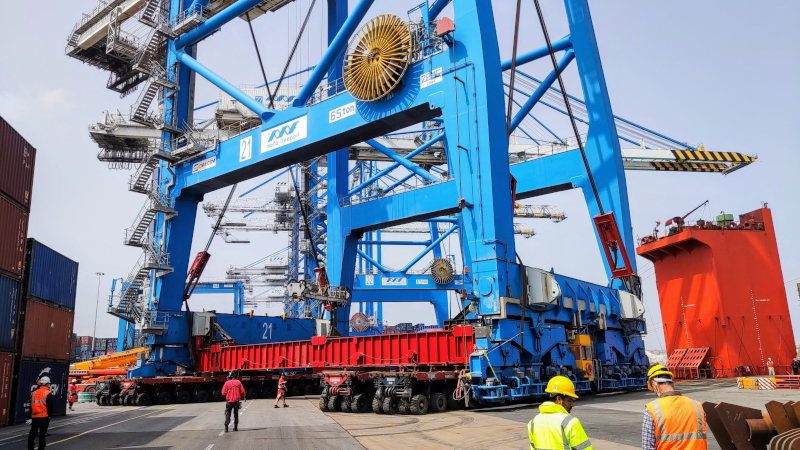 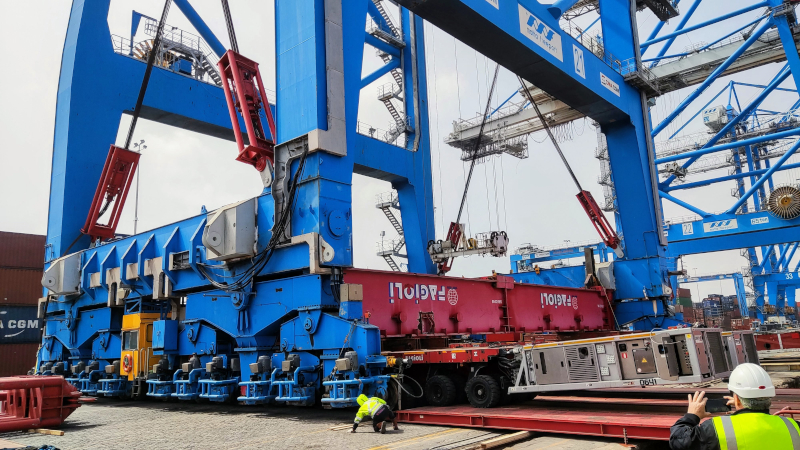 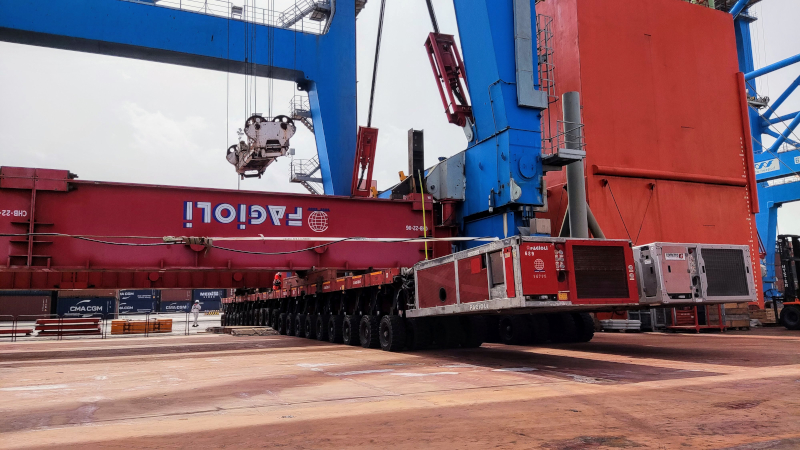 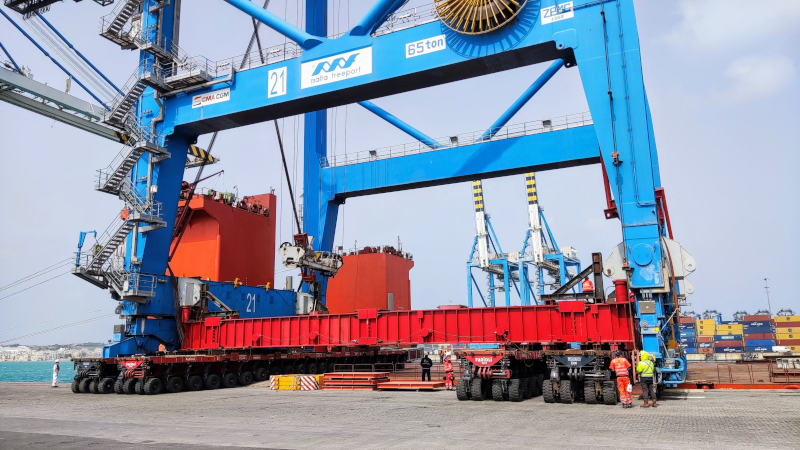 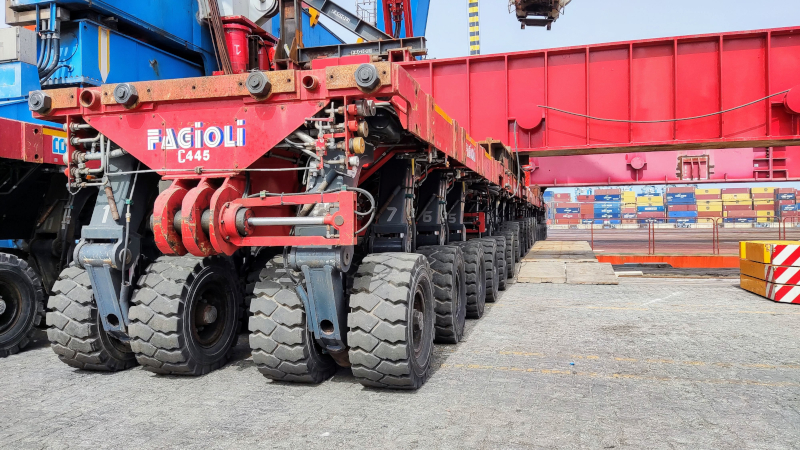 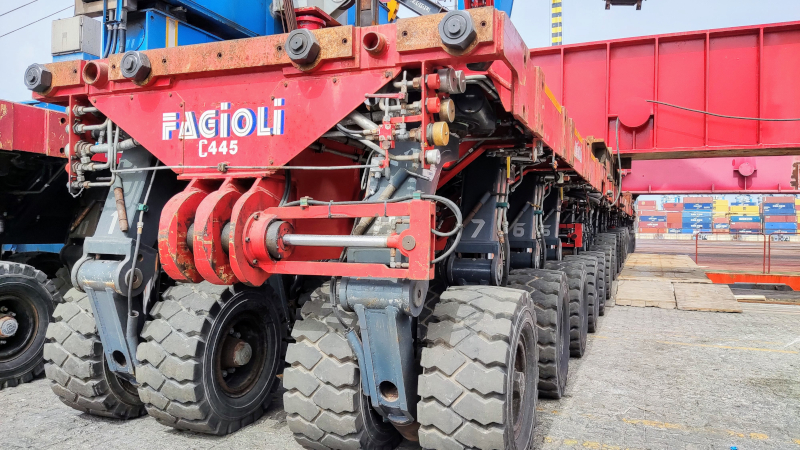 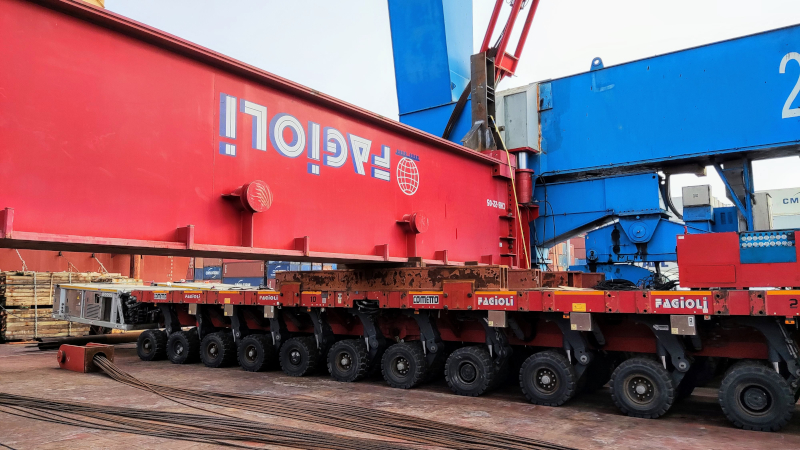 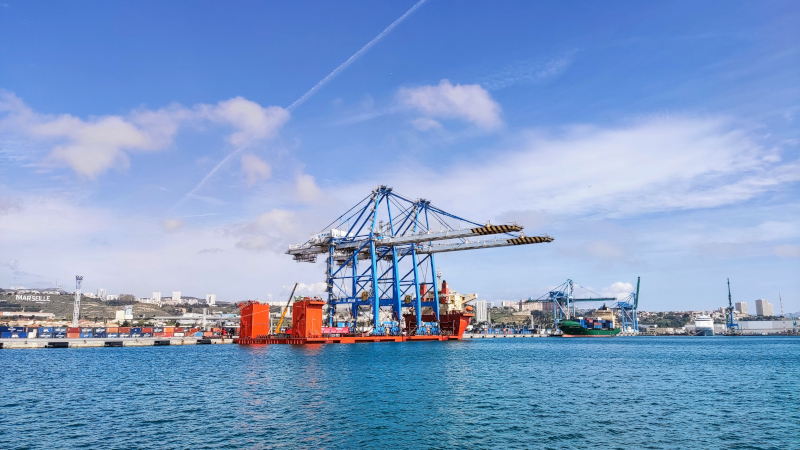 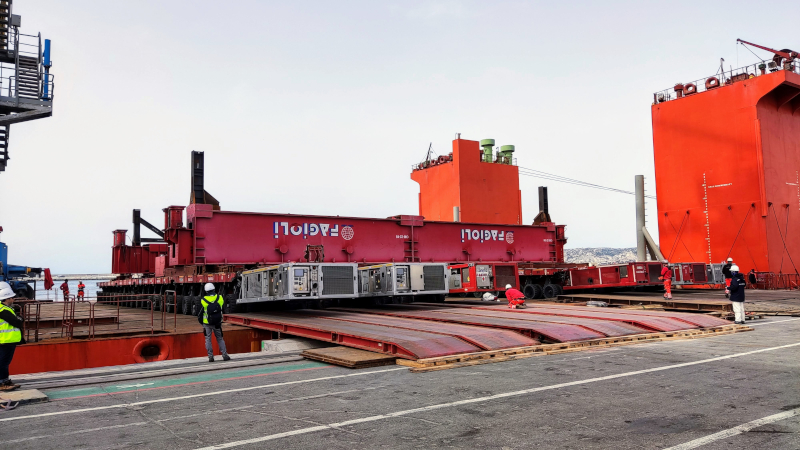 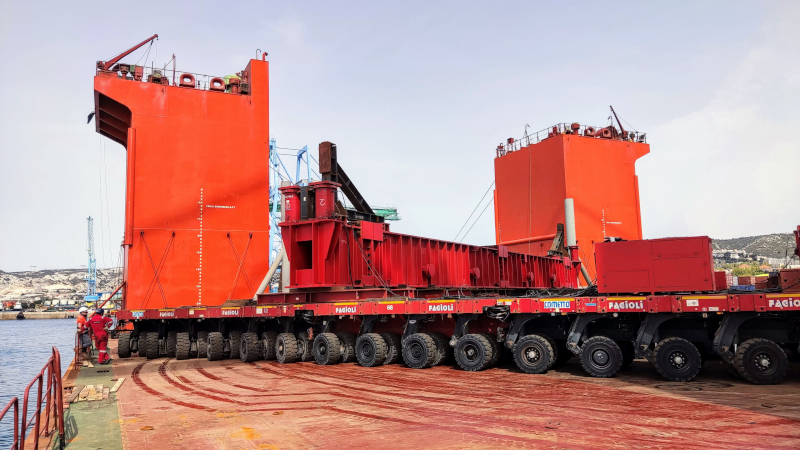 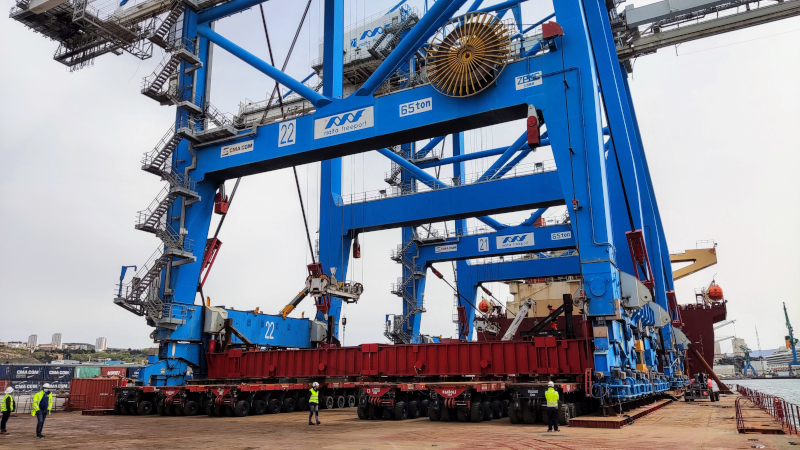 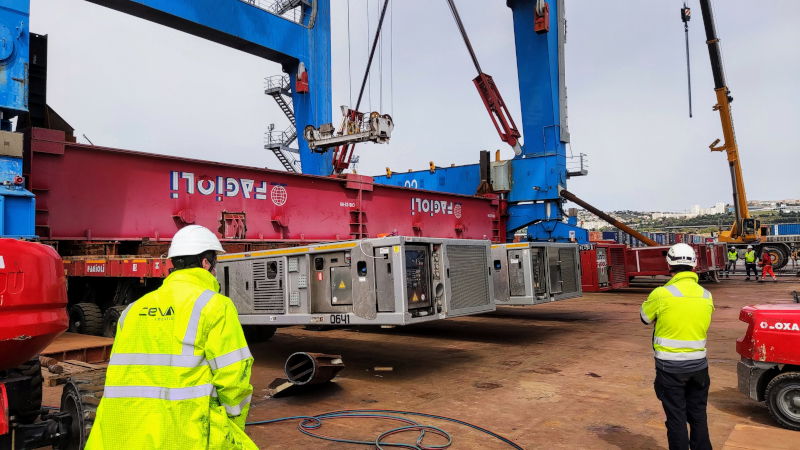 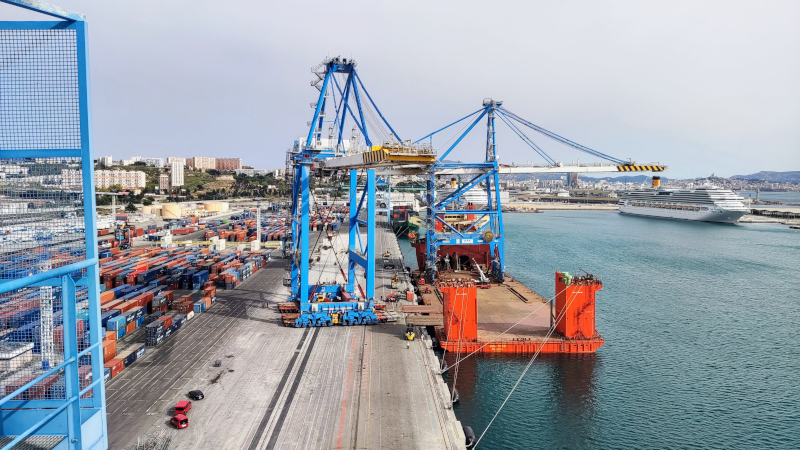 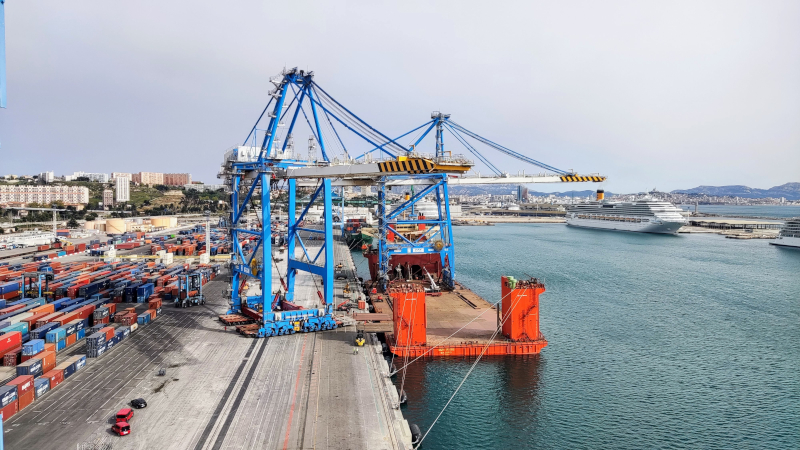 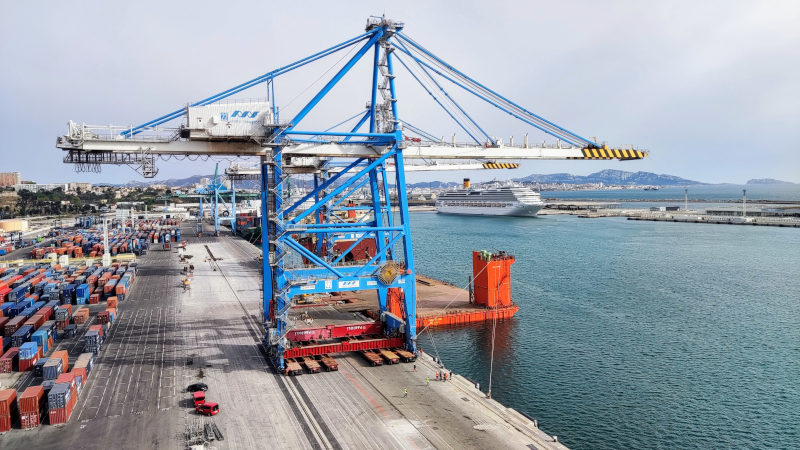 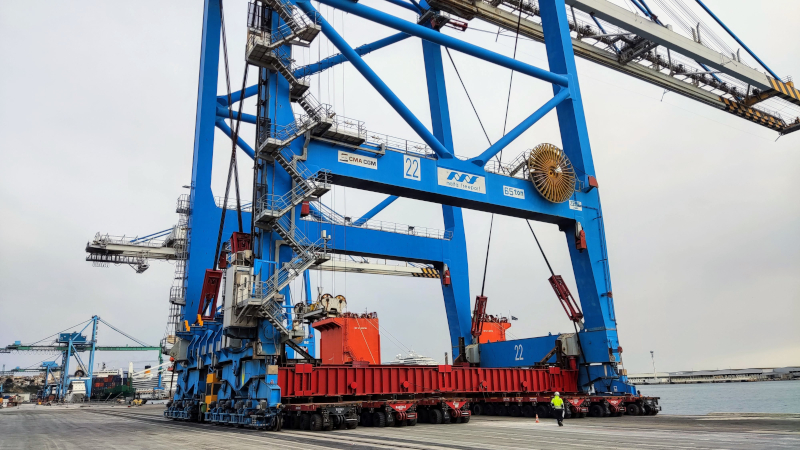 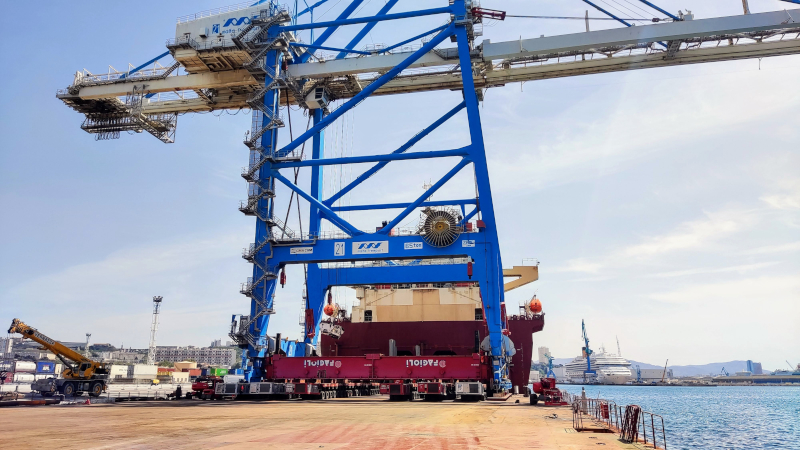 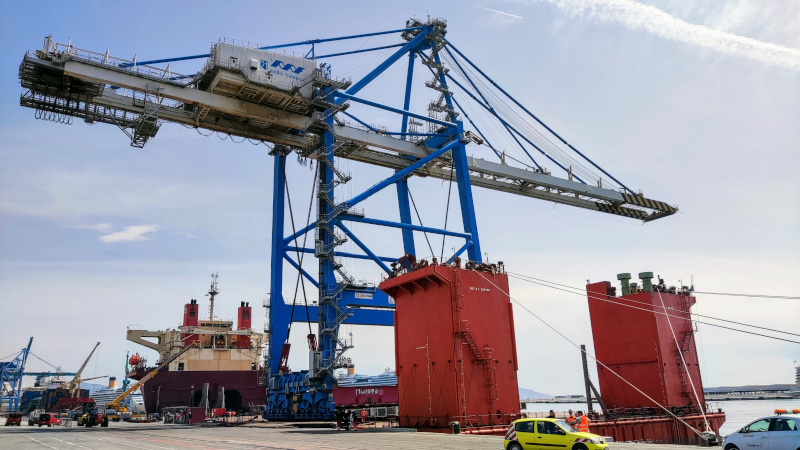 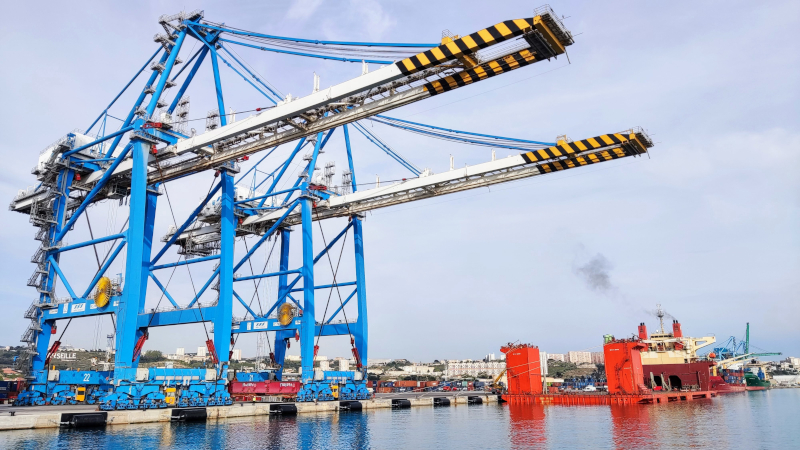 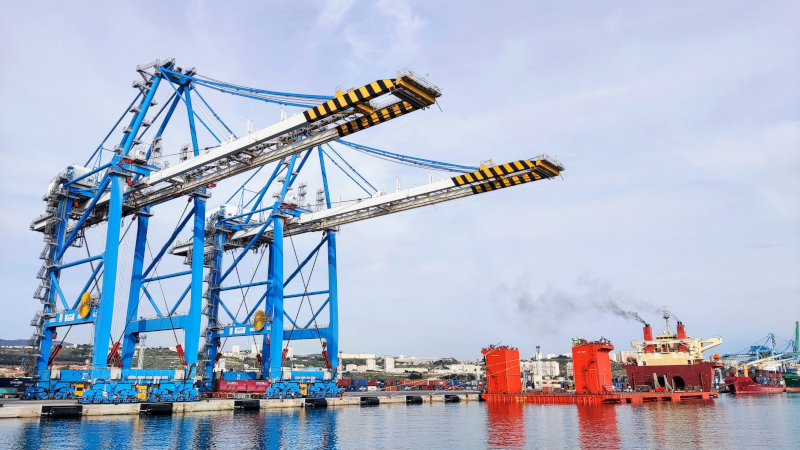 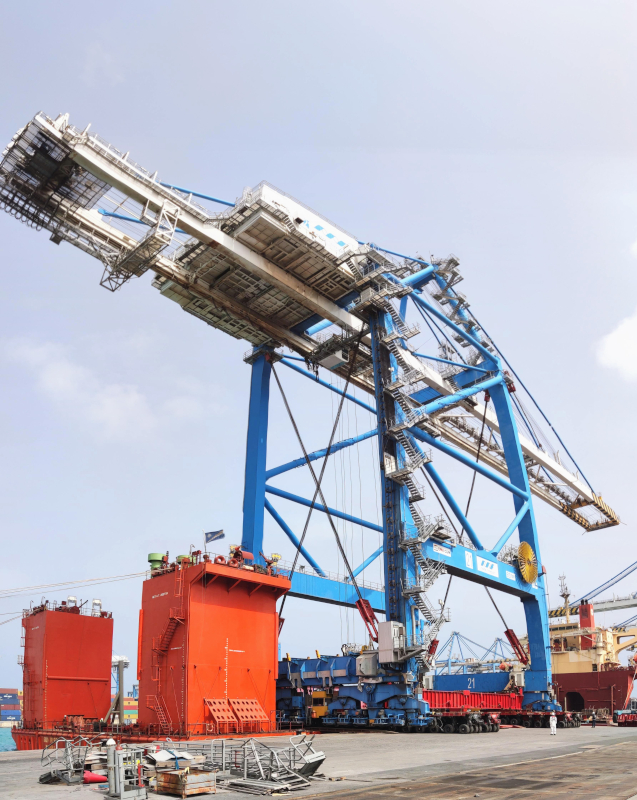 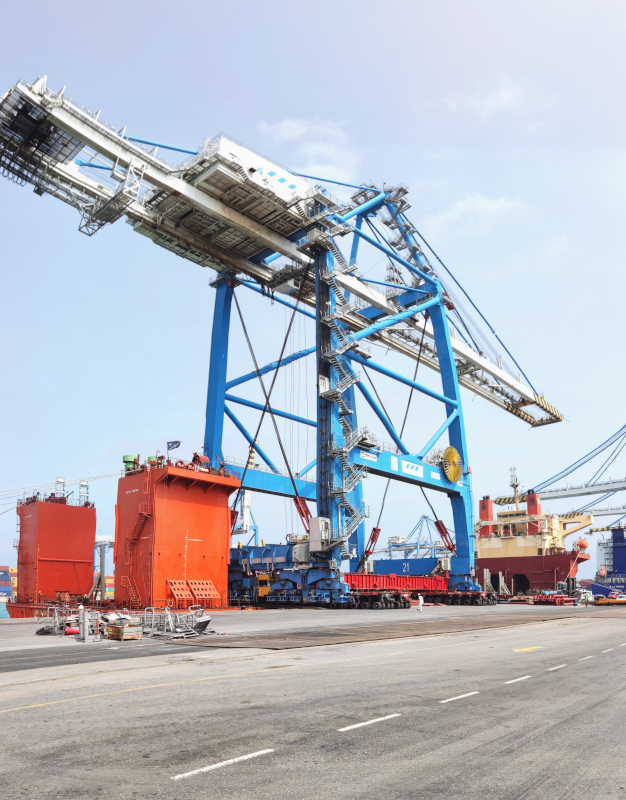 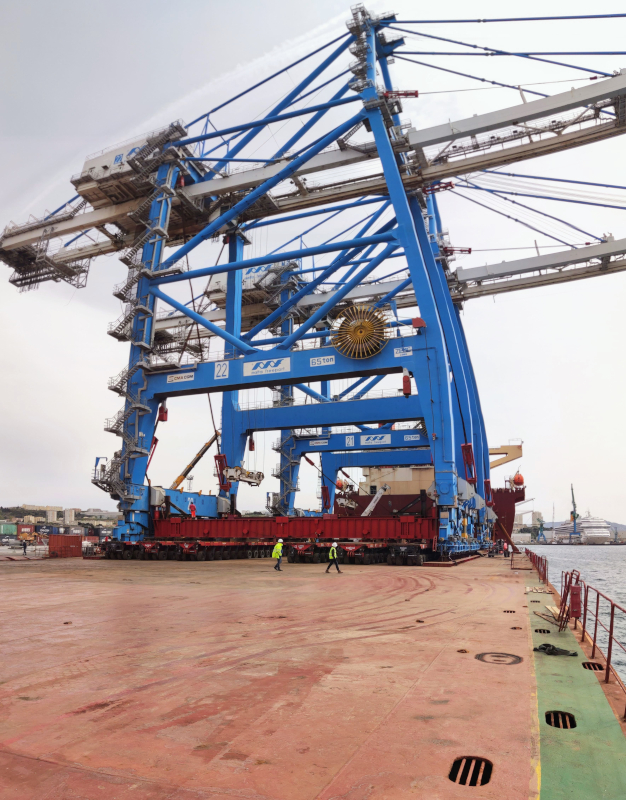 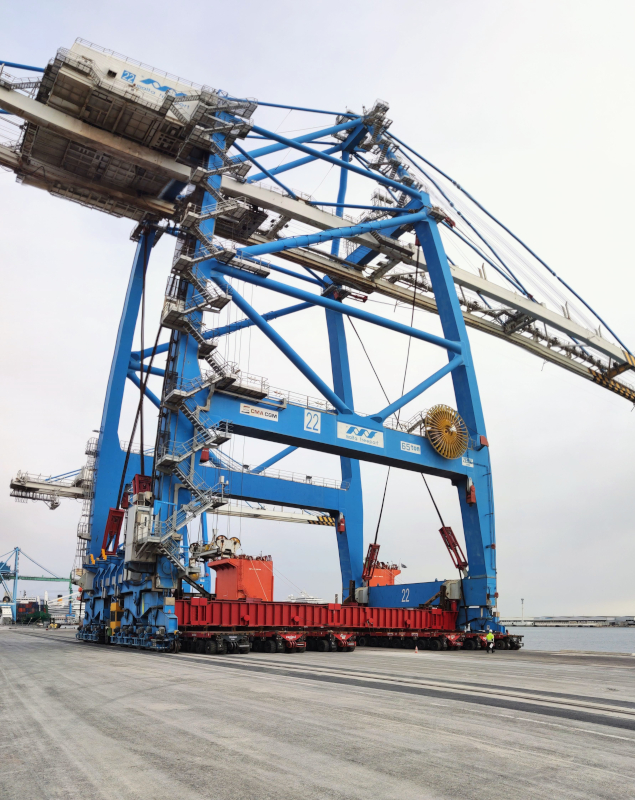 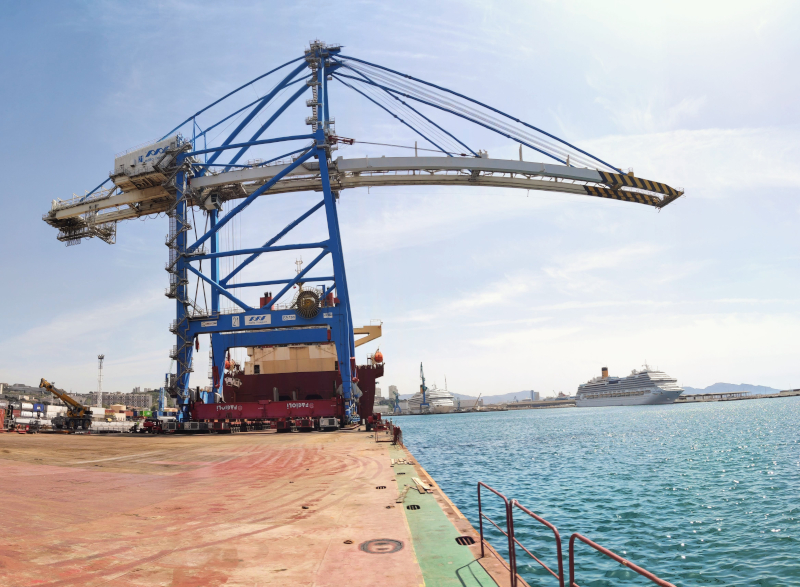 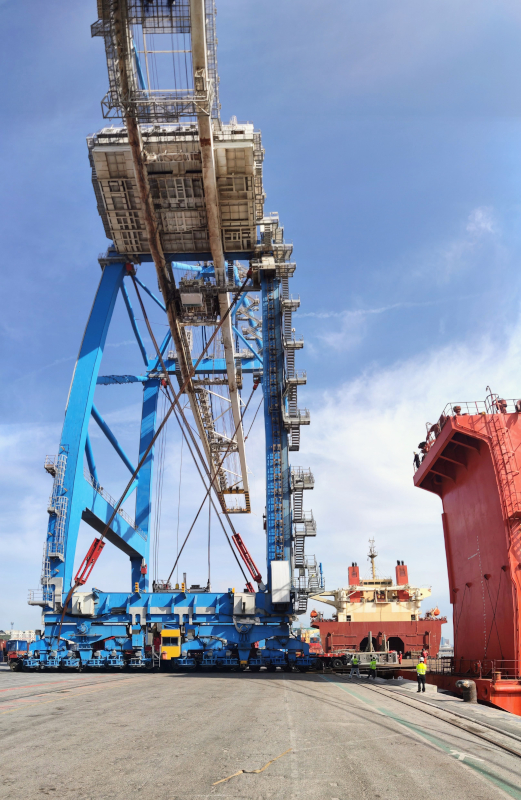