Tadano, now with Demag inside

Terex has announced the sale of Demag mobile cranes to Tadano. At the same time, the company says it will exit the North American mobile crane product lines manufactured at its Oklahoma City facility.

The deal leaves the crane industry with only three European all terrain crane manufacturers: Manitowoc Grove, Liebherr, and the now combined Demag and Tadano; in the US, Link-Belt manufactures a line of all terrains.

Terex’s Demag plant in Zweibrücken is a mere three-and-a-half-hour drive from Tadano’s Faun plant in Lauf an der Pegnitz. While Tadano has more cranes under 100t (four compared to Demag’s two) it has none over 400t, where Demag has three, at 500t, 700t, and 1,000t. A 600t Tadano, with the company’s unique ‘triple boom’ system, has not yet entered the market, more than three years after its first announcement.

Only two models in the two companies’ line-up match for capacity and number of axles: the Terex Demag AC130-5 and the Tadano ATF130G-5; and the AC220-5 and the ATF220-G5. However, more are close to each other in terms of carrier size and capacity.

In his statement to customers, Terex president and CEO John Garrison said, “We want to assure you that Terex is committed to supporting your business on an ongoing basis with the parts and services needed to keep all of your Terex cranes working for you. This includes those products we are exiting and those we will continue to offer, as well as Demag mobile cranes business through the transition of ownership and services to Tadano.

“We believe the sale of the Demag mobile cranes business to Tadano is good for our customers. It will create a company that is stronger together, with a common core business of lifting. Combining Tadano’s 100 years of experience with Demag mobile cranes’ nearly two centuries will create a global lifting company capable of bringing new leadership to the industry and continuing to create innovative lifting solutions for you.”

The announcement does not mean the end of Terex’s involvement in the crane industry: rough terrains will still be built in Crespellano, and towers in Fontanafredda, both in Italy; the pick and carry range will be built in Brisbane, Australia.

The news came on February 22, four days after Terex had announced a delay in its quarterly results, originally due on February 19. Cranes Today received the news in an announcement to customers, late on Friday 22 February.

Cranes Today has requested comment from Tadano by email. At the time of writing, a Tadano statement was not available. 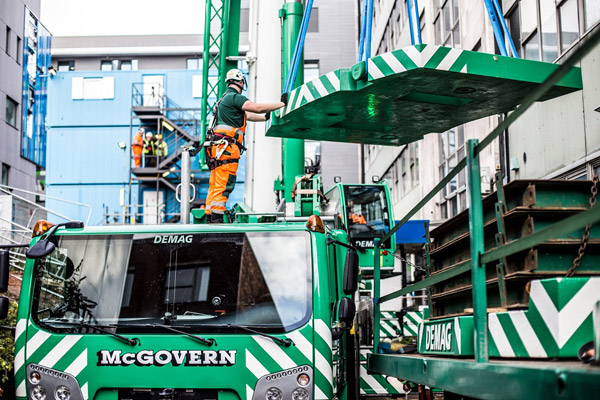