Rising in the West

Over recent years, Kato has returned to Europe with a new range of City mobile cranes, sold through UK and Ireland dealer Rivertek. At Bauma, the company showed a 100t all terrain built for Asian markets, the 100t KA- 1000RX, and a prototype of the next CE-marked City crane, the 25t CR250-RV.

One of the first steps for the company has been the return of its small all terrains, or City cranes.

These are being sold through UK and Ireland dealer Rivertek. Colin Cleary, manager of Rivertek, says, “The small City cranes are a niche market. The 13-tonner and 20-tonner are used predominantly in very tight confined spaces. What’s nice about the CR250-RV is that the overall dimensions are the same as the 20t machine, but you have this extra lifting capacity without the machine being much larger.”

The new machine was shown at Bauma as a prototype. Kato and Rivertek expect the crane to be ready for sale in late 2019. Kato had left the market some years ago; but Cleary says, previous models in the 25t line had been ‘hugely popular’ in the UK and Ireland: “We’re delighted to see them return,” he adds.

But the new machines are not the only investment Kato is making as part of its push into Europe: the company has also, Watanabe says, invested in a new after sales and support operation, based in the Netherlands.

The other new machine on the Kato stand was the 100t all terrain, the KA-1000RX. This machine uses a number of European parts, but is not CE-marked. Cleary explains that Japanese domestic road regulations effectively require a wider carrier. At 2.75m wide, the all terrain matches this requirement, but is wider than European customers are used to.

As well as giving Bauma attendees from around the world an insight into Kato’s engineering capabilities, the event allowed Kato’s engineers to meet with customers, and get feedback, as part of the company’s ‘customer voice’ programme.

Watanabe and Maeda explained that the show presented an opportunity to show these machines as prototypes. While cautious in explaining the company’s plans, they acknowledged that ‘maybe’ the company could in future offer CE-marked all terrains. With the new dedicated European aftersales operation, and Rivertek pushing hard to promote and sell the niche City cranes, the company is certainly well placed to offer new competition in the sector. 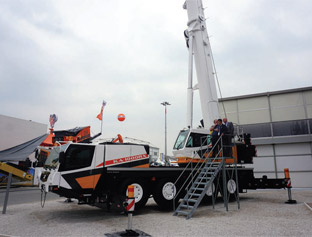